The interview below was posted in June, 2013. I was surprised and honored to see it referenced in Mr. Lacy’s New York Times obituary, but I think it may have been one of the last interviews given by the author.

I became acquainted with Mr. Lacy online after he wrote me a friendly note in response to a book review I had written. After this interview, we exchanged a few more emails and then lost touch.

Allen Lacy is without doubt one of my favorite garden writers. For roughly forty years he has written about plants and gardens with passion, knowledge, and gentle (often self-mocking) humor. He is the author or editor of 10 books, including Home Ground, In a Green Shade, The Garden in Autumn, Farther Afield, and The Gardener’s Eye. For a dozen years he wrote a newspaper column on gardening, first at The Wall Street Journal and then the New York Times.

In addition to his garden writing, Lacy was a professor of philosophy at Stockton College, and currently holds the title of Professor Emeritus. In addition to his own garden in Linwood, New Jersey, Lacey also helped create and volunteers at the Linwood Arboretum.

A couple of weeks ago, I unexpectedly found myself exchanging emails with Allen Lacy. I asked him if he would be willing to do an interview, and he was gracious enough to agree.

You started gardening while growing up in Texas. How did gardening become a lifelong obsession for you?

Since I am now, at 78, what I prefer calling “advanced middle age,” questions about the remote past are usually hard to answer. This one is easy because the memories are still vivid. In the third grade, in Irving, Texas, I was something of a disciplinary problem. I managed to get myself expelled toward the end of the spring term. I was in what amounted to a parole, supervised by a wonderful fourth grade teacher, Ruth Harkey, who ran a small nursery and was a breeder of bearded iris. I worked for her after school and on Saturdays. Mrs. Harkey taught me the elements of hybridization, and I was hooked at the idea of interfering with nature to bring something new into being. My first plant acquisition (25 cents, my entire weekly allowance) was a yellow iris called ‘Happy Days.’

The next stage, after moving to Dallas, took place at age 12 when I started working at Nicholson’s Seed Store which required me to memorize its catalog.

When did you start writing about gardening, and how did that come about?

Writing came first, then writing about gardening. In my senior year in college I was privileged to be enrolled in the legendary year-long writing seminar of Professor William Blackburn, previously taken by writers like William Styron, Mac Hyman, and Reynolds Price. At that time, Duke’s Hoof ‘n’ Horn annually put on student-written musical plays, and I was the author of something called “Top Secret,” which dealt with the confusion that erupted when the US Navy wanted to test atomic weapons on Femina, a Pacific atoll inhabited by feminist colonists. I also had a one-act play about Mexican bandits that was produced by the Carolina Playmakers at UNC. Later, after grad school, my dissertation on the Spanish philosopher Miguel de Unamuno was published, and I was co-translator of two volumes for Princeton University Press. In the late 1970s I began reviewing books on general topics for The Chronicle of Higher Education.

Meanwhile, I harbored the itch to be a novelist, but without success. My wife suggested that I write something about gardening, and I sent off an over-the-transom piece to Horticulture magazine which the science editor, Roger Swain, accepted. Manuela Hoelterhoff, then arts editor of The Wall Street Journal saw the piece, asked me to write for her, and lo, I became a garden columnist.

You’ve written about how at various times you’ve developed a mania for certain plants (hostas, daffodils). Are you suffering from any plant manias at the moment?

Yes. For the Linwood Arboretum, where I am founding curator, I just acquired a large collection of over 100 native pitcher plants, 30 different species or hybrids.

You’ve visited gardens all over the world. Which garden did you think was the most remarkable?

This is an impossible question to answer, for although this garden or that may be striking or impressive, what I most admire is the human urge to take an empty or an ugly site and transform it into a human artifact. Right now the garden I would most urge others to visit is actually the largely mail-order nursery Plant Delights, which co-exists with the Juniper Level Botanical Garden, both brought into being by plantsman Tony Avent.

You’ve been in the same garden for about 40 years, right? From the perspective of all that time, what would you say were your worst and best home garden decisions?

The best decision was getting rid of the lawn planted by the previous owner of our house, also some of the little spruces he had dotted in perfect symmetry everywhere. The worst decisions were (1) not getting rid of al those spruces–and (2) planting yellow groove bamboo. But it took time for both plants to become serious space hogs. In the meantime, I had a huge cottage garden in which to experiment with a host of herbaceous perennials. 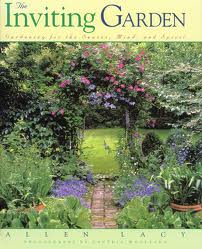 Please tell us about a couple of people who have inspired you as a gardener or writer.

Easy question. First, two of my editors were also fine writers, namely Roger Swain and Manuela Hoelterhof. Roger’s red suspenders were memorable for all watchers of the Victory Garden on PBS, and his columns of science essays from Horticulture were exemplary in more ways than I can outline. Manuela still writes for Bloomberg, and her columns on opera are astute, delightfully opinionated, and often very funny.

As a gardener–no, really a master plantsman, the late J. C. Raulston, founder of the arboretum at the North Carolina State University now named in his memory, was hugely influential on me and many others.

You taught philosophy at Stockton College for many years. Did your gardening at all influence how you approached philosophy?

I don’t think so. For me, these two categories were strongly different. Philosophy had great, often unanswerable, questions. In horticulture, the basic questions had answers. (Which end of the bulb points down?)

You were instrumental in the creation of the Linwood Arboretum. Describe how this park came to be.

Again, an easy answer. Just down the street from the garden my wife Hella and I have been making for over 40 years, there was a real estate eyesore. It was first an electrical substation and then a cleared acre lot that was proposed as a site for a soccer practice field. I thought it an ideal spot for an arboretum, based on what Raulston had done in North Carolina. Linwood’s city council agreed as did our county freeholders, who came up with a grant for construction and plant acquisition. Many others lent their minds and their hands to building a small arboretum packed with unusual and I think superior shrubs and small trees.

← Geraniums On The Cranium
Oh, ‘Casa Blanca’, What Happened To You? →