For some reason June is a very blue/purple month. Just recently I wrote about two blue June flowers, Wild Blue Indigo (Baptisia australis) and Ohio Spiderwort (Tradescantia ohiensis). But it seems these days that practically the only colors to be seen in the whole front garden are on the blue-purple spectrum (the back, with mostly white flowers, is a different story). 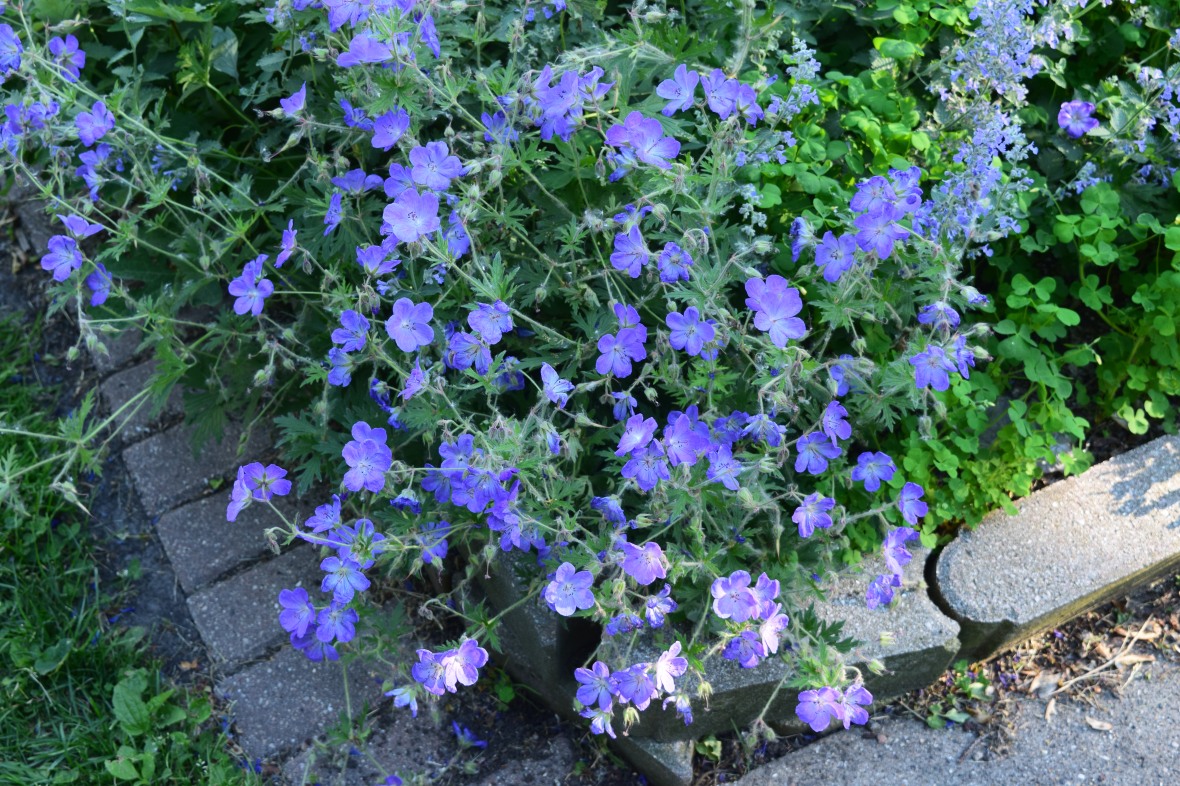 First of all, there are the hardy Geraniums, like G. ‘Johnson’s Blue’ on this corner of the Driveway Border.

I planted three ‘Johnson’s Blue’ Geraniums in this spot thirteen years ago, and one of those three is still chugging along. The others have faded away, though

So I’ve been switching from ‘Johnson’s Blue’ to ‘Rozanne’. ‘Rozanne’ blooms longer and sprawls farther than ‘Johnson’s Blue’, which blooms more briefly but also more prolifically. ‘Rozanne’ also has a habit of climbing up through its taller neighbors, a quality I appreciate. I used ‘Rozanne’ to replace a little patch of Scabiosa columbaria ‘Butterfly Blue’ on the Left Bank Bed. The Scabiosa failed to live through the winter. 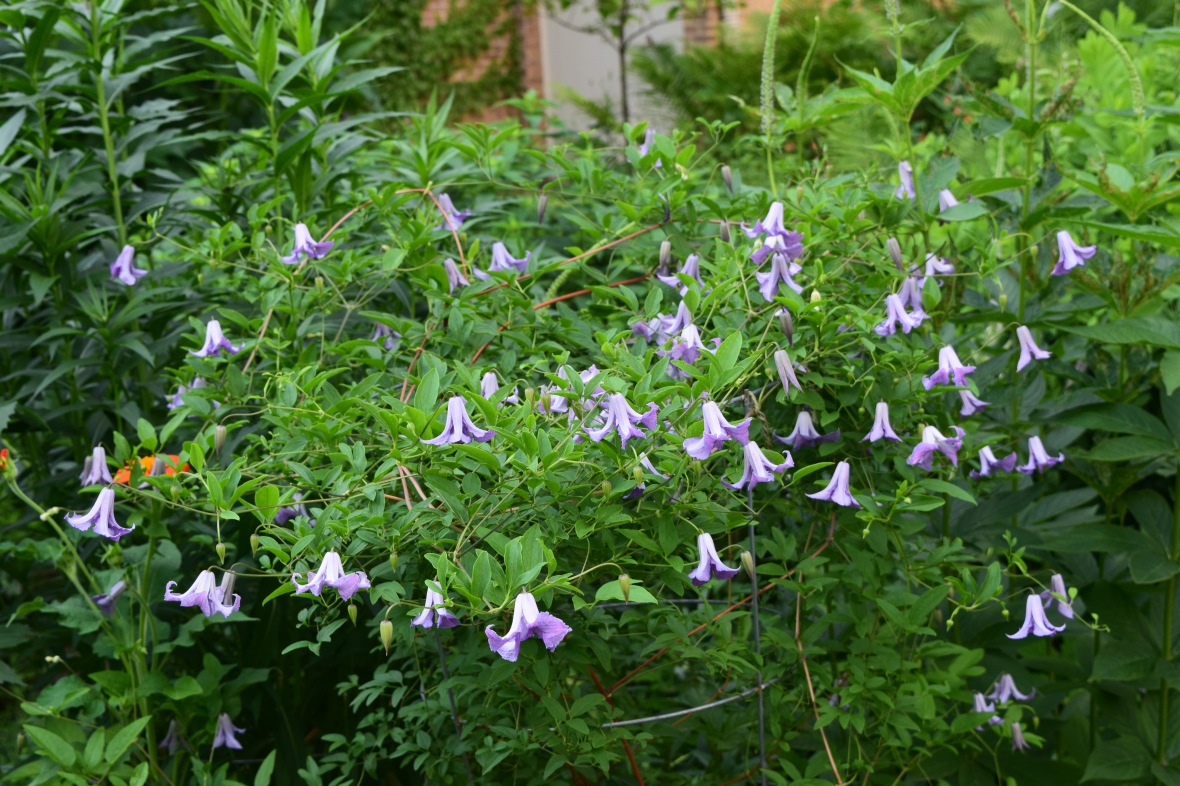 This is the first year that one of our Clematis viticella ‘Betty Corning’ is blooming abundantly. Actually, we have three, one in the Sidewalk Border and two in the Driveway Border, including the one above. I’m hoping the other two soon catch up with this one.

I really like these small, dangling, bell-shaped flowers. Of course, you need a mass of them to make an impact. I hope they are still going strong when their brightly colored neighbors (such as the Mexican Sunflowers, Joe Pye Weed, and Yellow Coneflowers) start to bloom.

Have I already mentioned the ‘Six Hills Giant’ Catmint (Nepeta faassenii ‘Six Hills GIant’) this year? Well, it’s still blooming it’s heart out, though I think soon I should cut it back, which is supposed to bring on new flowers.

Salvia sylvestris ‘Caradonna’ and ‘May Night’ are also getting to the point where they will need to be cut back, but in the meantime they have been making a solid contribution to the month’s blue-purple color theme. 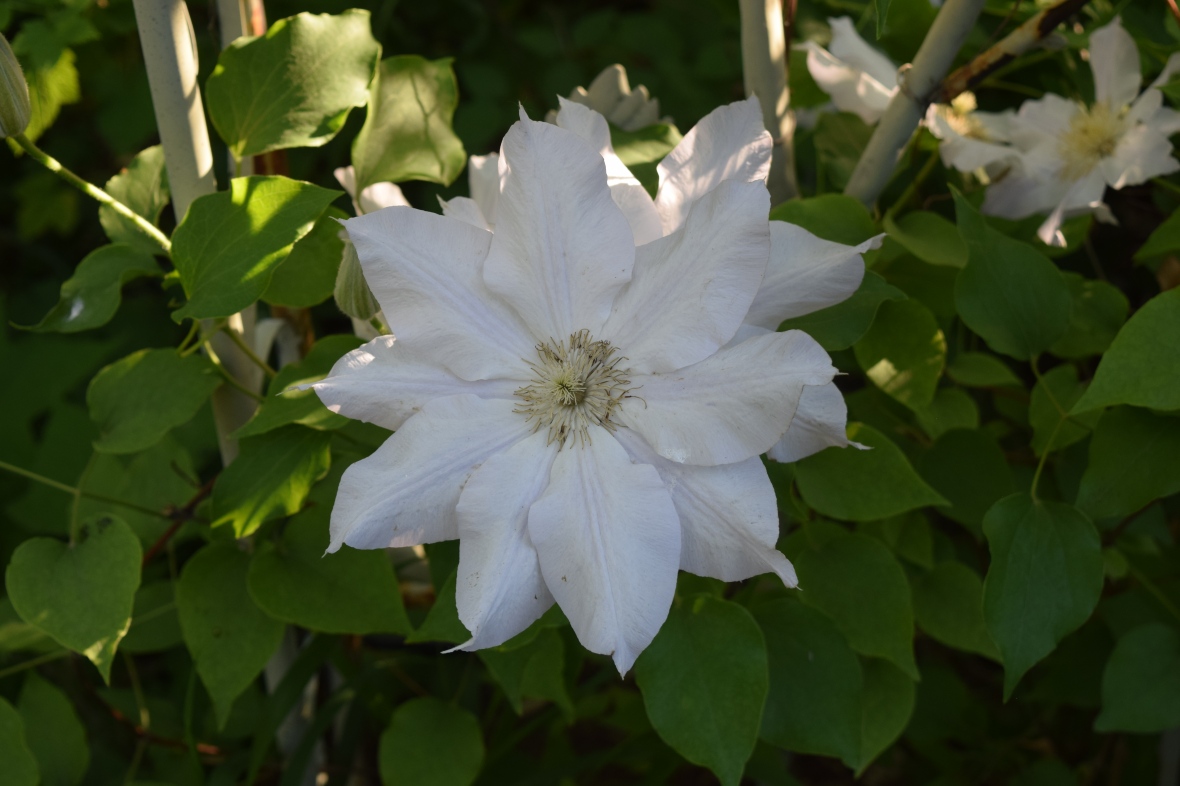 And Clematis ‘Blue Ice’ also got into the act with a second flush of palest blue blooms.

Does your garden tend to bloom blue in June?

← Are Spiderworts Worth It?
A New Look for Rupert the Rooster →