The Lurie Garden in July

I wanted to capture the Lurie Garden while the flowers of early July, especially the Echinaceas, were still blooming their hearts out. Judy was out of town, so I took the camera to work with me a couple of days ago so I could take pictures during my lunchtime walk to the garden. 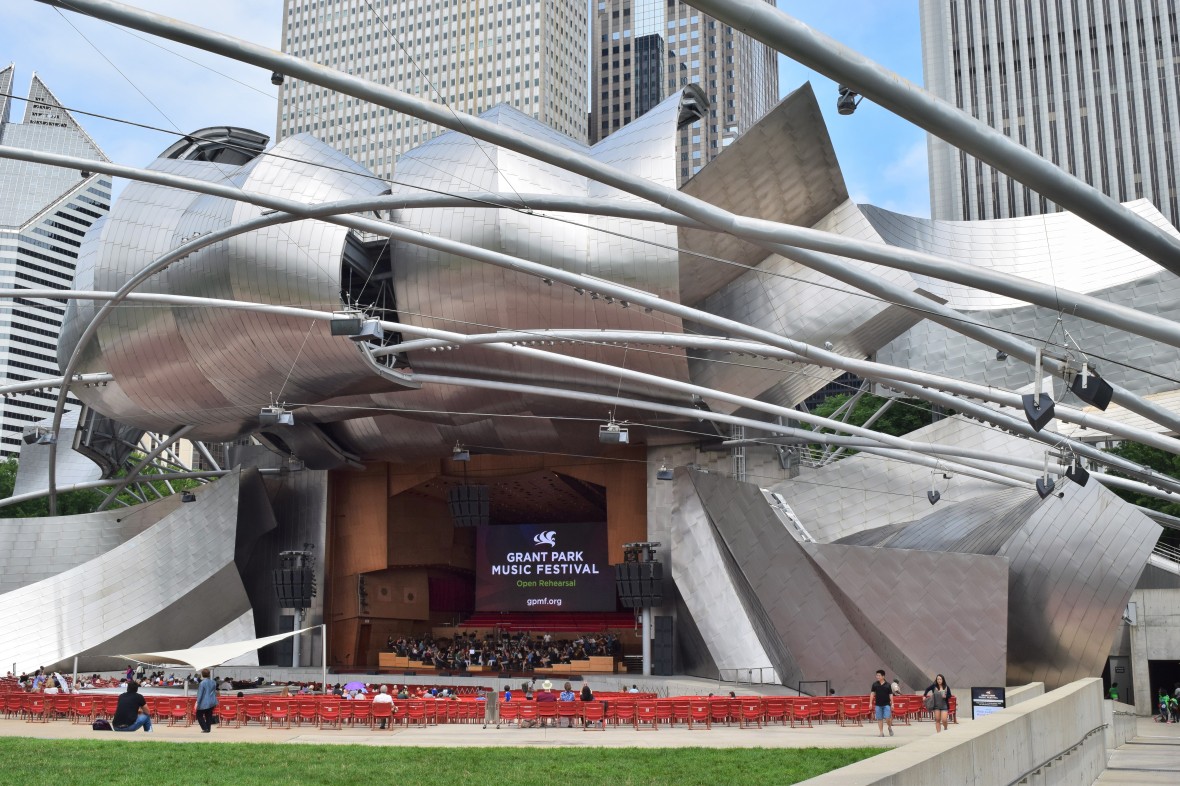 The route to Lurie Garden takes me past the Pritzker Pavilion, where the Grant Park Orchestra was performing one of its lunchtime open rehearsals. I didn’t recognize the classical piece they were playing, but it was something intense and emotional. It provided a kind of soundtrack for my stroll through the Lurie. 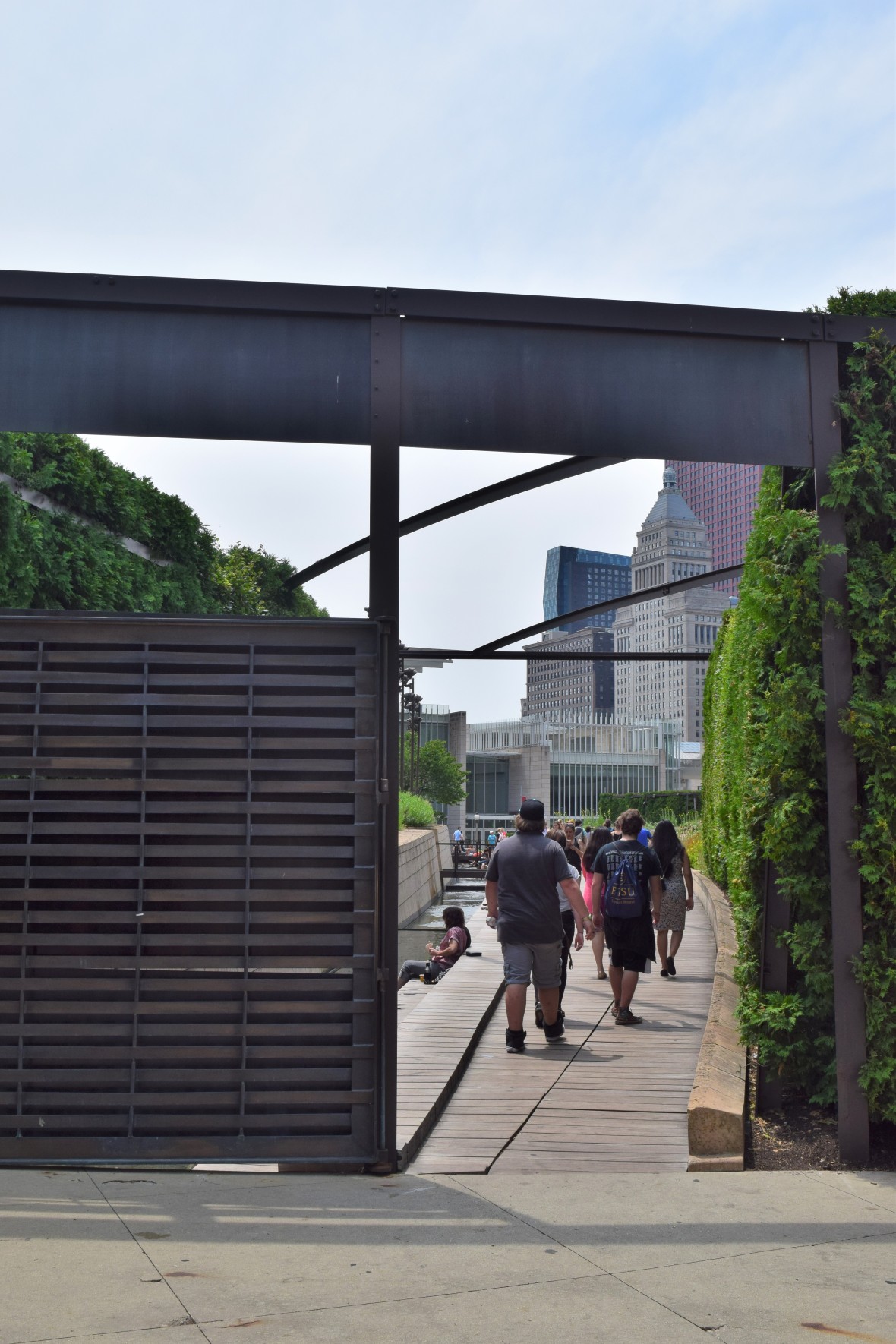 And then I was at the north gateway. I love the mystery of this threshold to the garden. No matter how many times I walk through, the scene that greets me on the other side is always a little bit of a surprise.

As on any hot day, people were taking advantage of the steeped rectangular pools along the boardwalk. 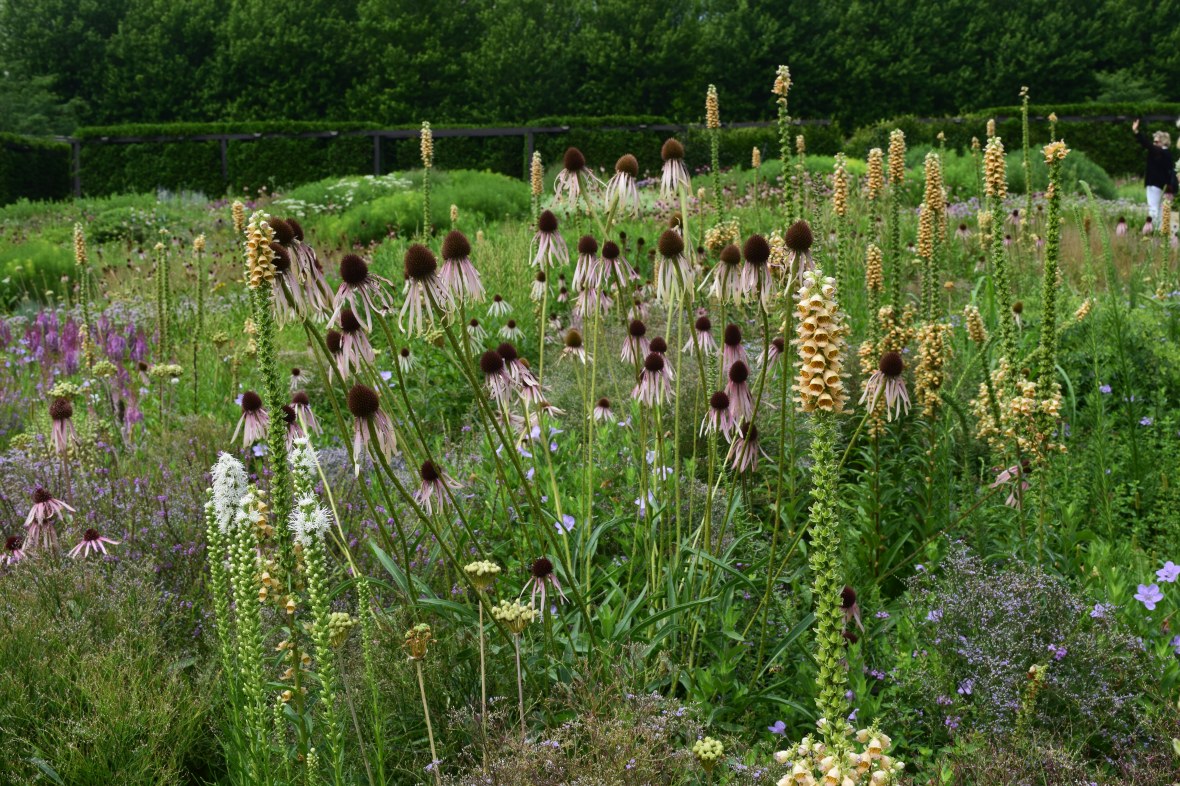 This unusual Digitalis is called Ruby Foxglove (Digitalis ferruginea). I don’t remember seeing it in the Lurie before – I wonder if it is a new plant they are trying out. One of the things I like about Lurie is that it is always evolving – partly through the competition of the plants themselves, and partly through interventions by the staff. 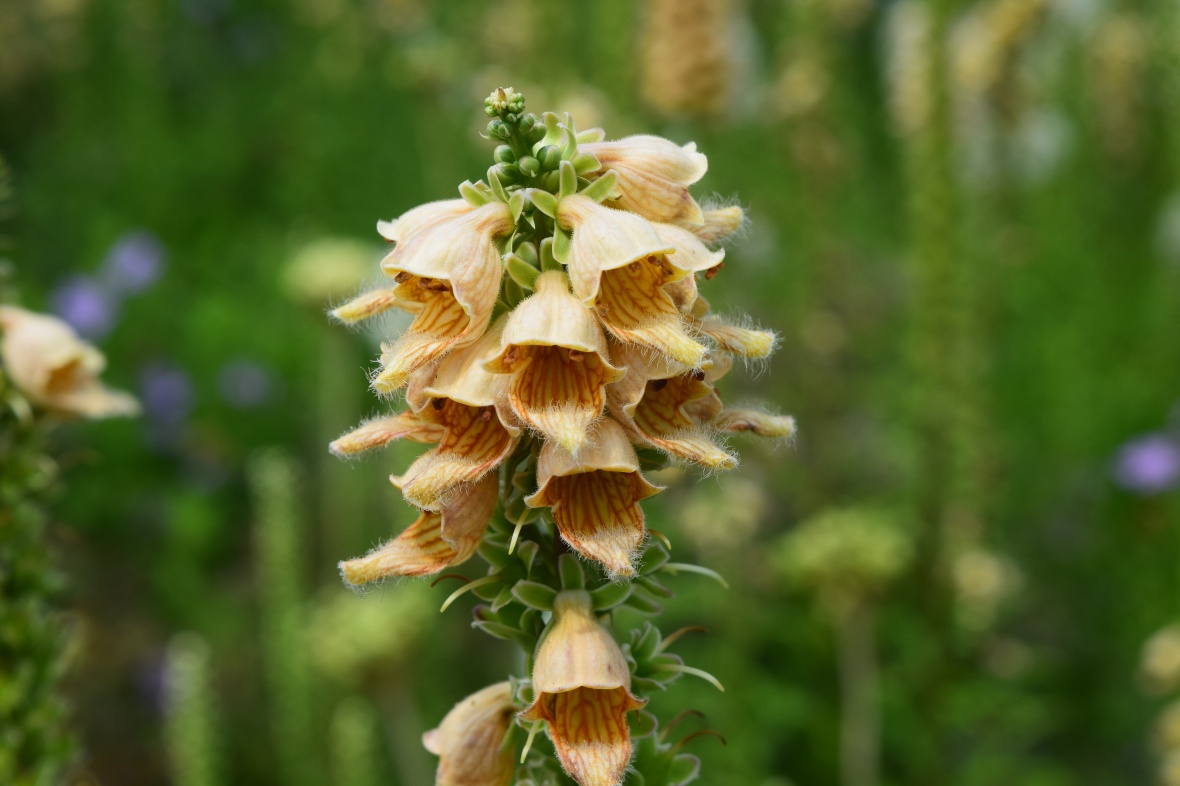 Anyway, I looked up Ruby Foxglove. According to the Missouri Botanic Garden website, it’s a perennial rather than a biennial foxglove. Also, it likes part shade – though it was growing in full sun at Lurie. The name comes from the flower’s interior veining.

This seems to be an excellent year for Echinaceas at Lurie. The masses of pink-purple flowers really stand out at this time of year. They strike me as an open, happy flower – a flower without secrets.

According to the Lurie Garden plant list, they grow a mix of Echinaceas, including Tennessee Coneflower (E. tennesseensis), E. ‘Pixie Meadowbrite’, Yellow Pollen Coneflower (E. simulata), and Pale Purple Coneflower (E. pallida). These are shorter species and varieties and I was impressed by the lack of flopping. 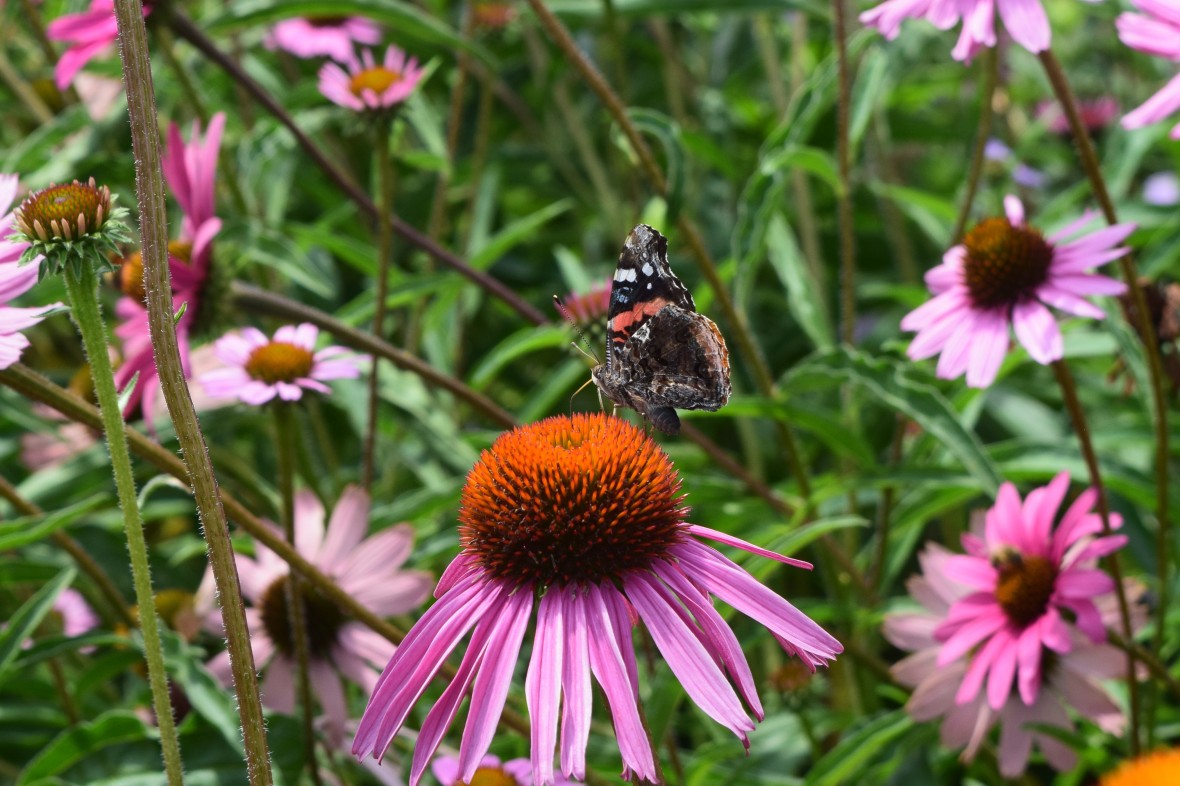 Pollinators were abundant on the Coneflowers and throughout the garden. Here’s a Red Admiral Buttefly I spied. 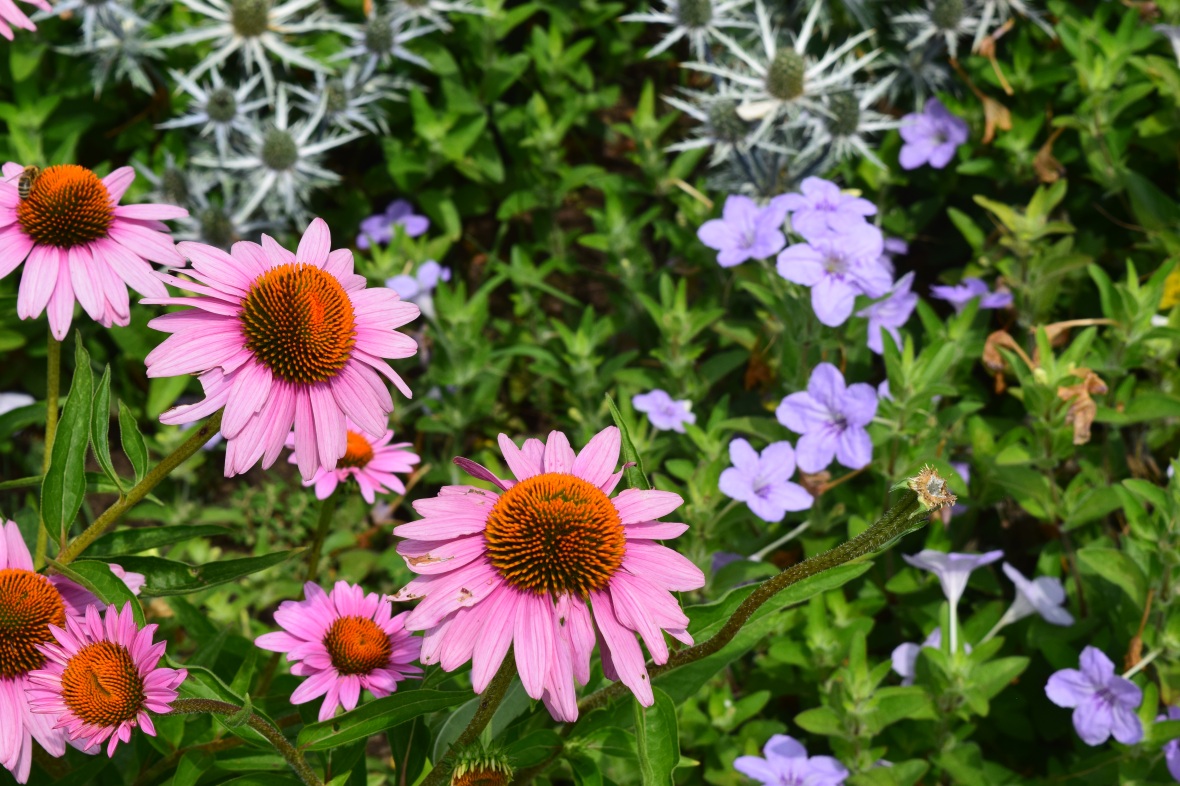 I noticed a lot of Wild Petunia (Ruellia humilis) growing at the base of the Echinaceas and throughout the garden. 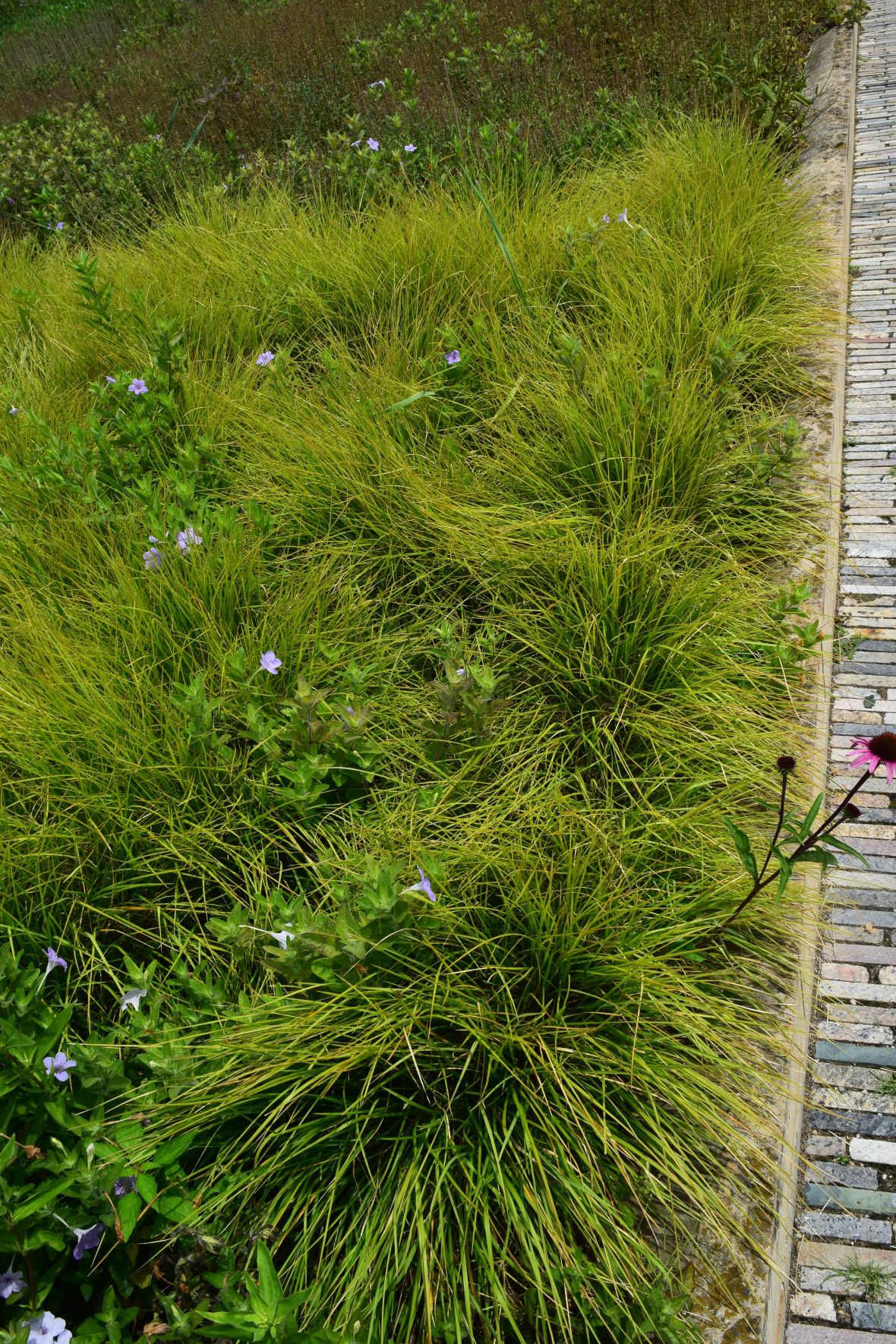 Here it is popping up among bunches of a golden-leaved bunchgrass – maybe Alkali Dropseed (Sporobulus airoides)?

Compass plant (Silphium perfoliatum) with its yellow flowers adds height to the mix of Lurie plants. It punches up from the ground and towers over its neighbors, who have mostly mounding habits.

It’s hard not to compare the Compass Plants to the tall skyscrapers of downtown Chicago. 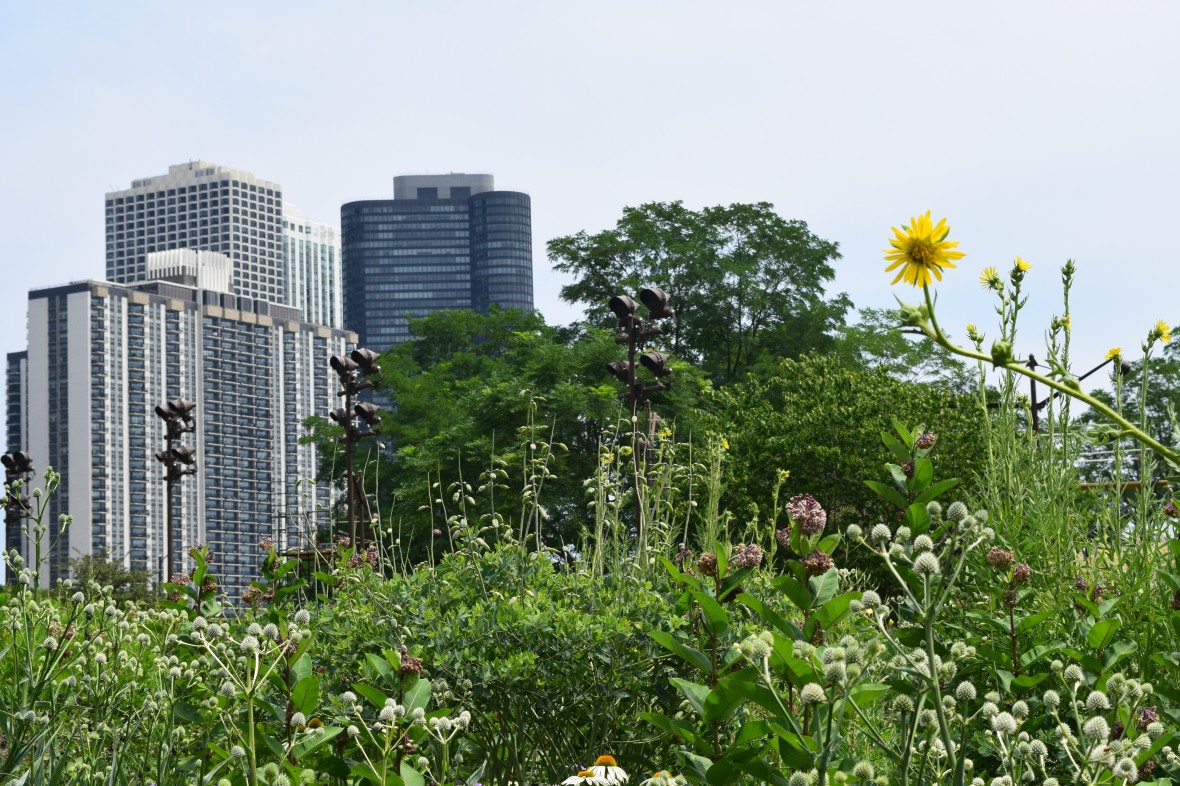 Compass Plants seem to be attention-seekers, not above a little photobombing.

Another plant that seems a lot more plentiful at Lurie this year is Common Milkweed (Asclepias syriaca). This makes me happy. This is a photo Judy took last week.

The Milkweeds added some wonderful fragrance to the Lurie experience.

If you plopped the Lurie Garden down in some suburb it would still be a wonderful garden, but it wouldn’t be as exciting if it weren’t surrounded by the Chicago skyline.

It could be my imagination, but I think there is not as much Russian Sage (Perovskia atriplicifolia ‘Little Spire’) as there used to be. 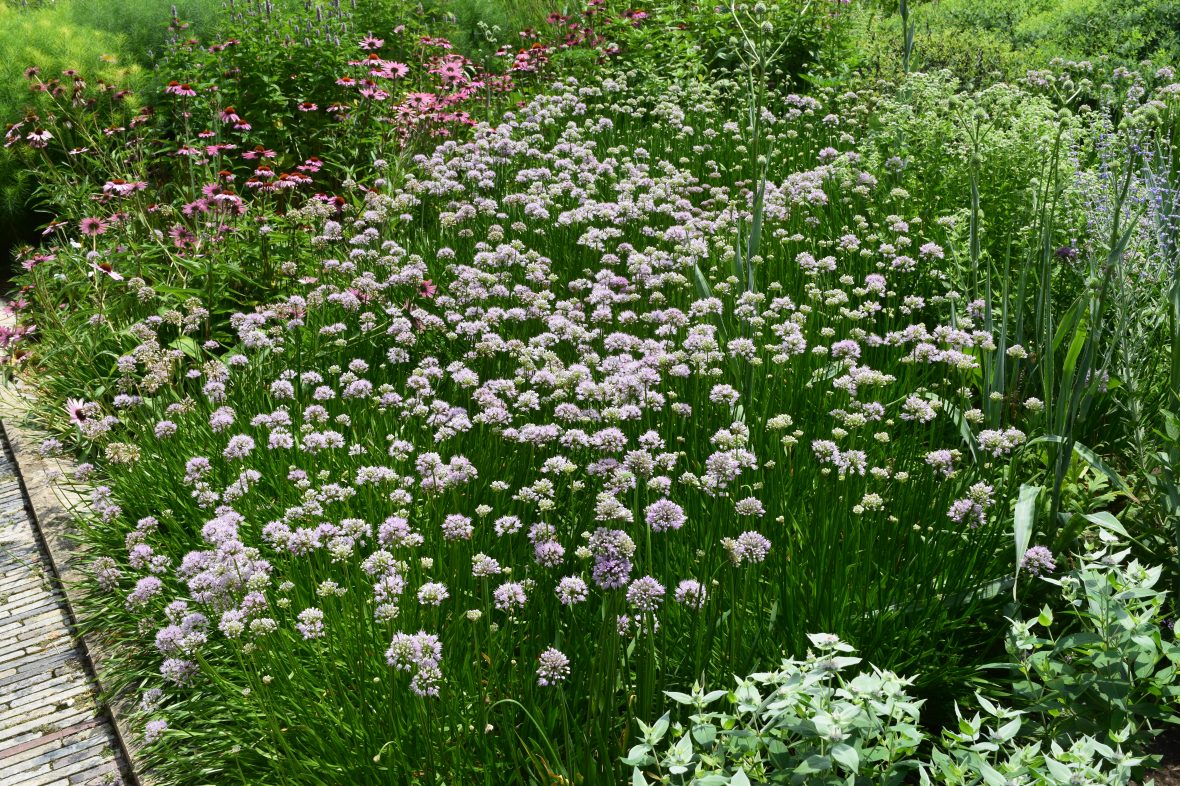 The ‘Summer Beauty’ Allium (A. lusitanicum) is just starting to bloom. They look like drifts of fuzzy blue dots. 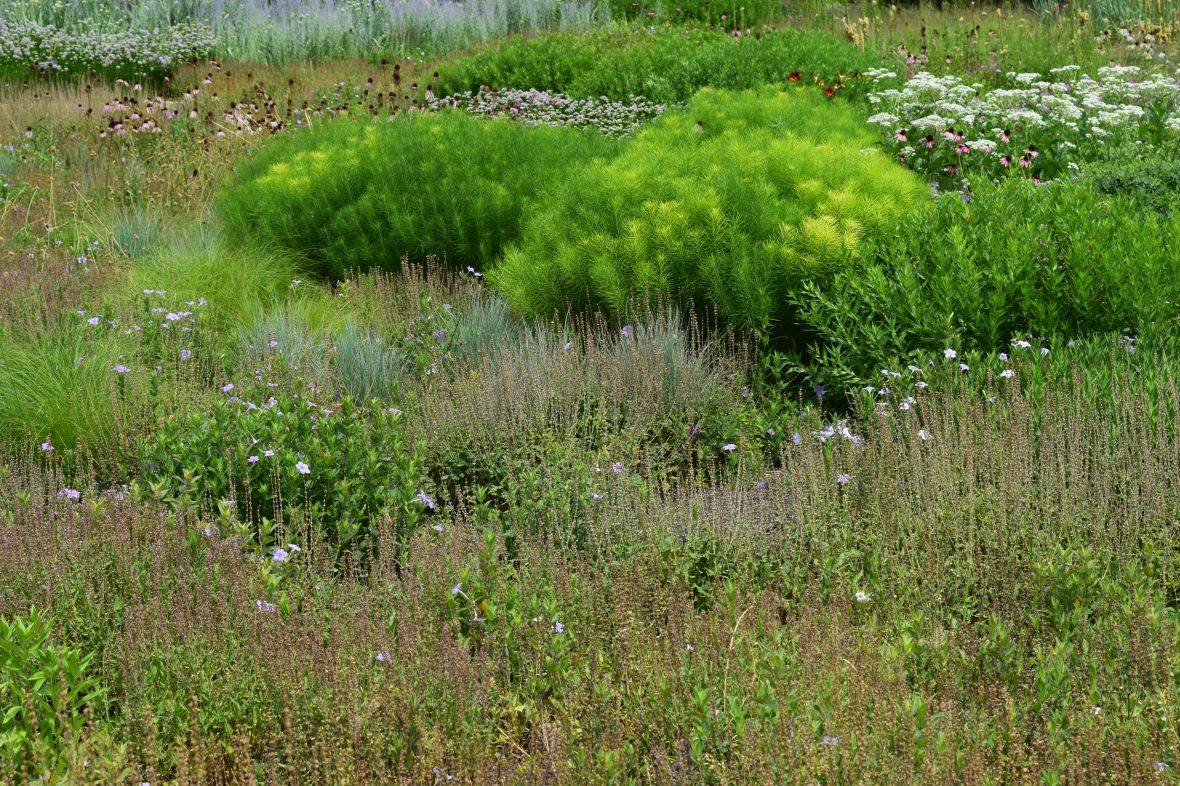 You could see that the feathery mounds of Bluestar (Amsonia tabernaemontana and A. hubrichtii) are just barely beginning to turn that golden color that makes them such a star in the autumn.

You can also see that the many Salvias have not been cut back, and that the flower stalks have been allowed to brown. I think this is a good choice, as it provides a nice contrast for all the green and the colorful summer flowers.

I like the mix of blue Anise Hyssop (Agastache foeniculum) with Echinaceas. This is photo Judy took last week with her phone. 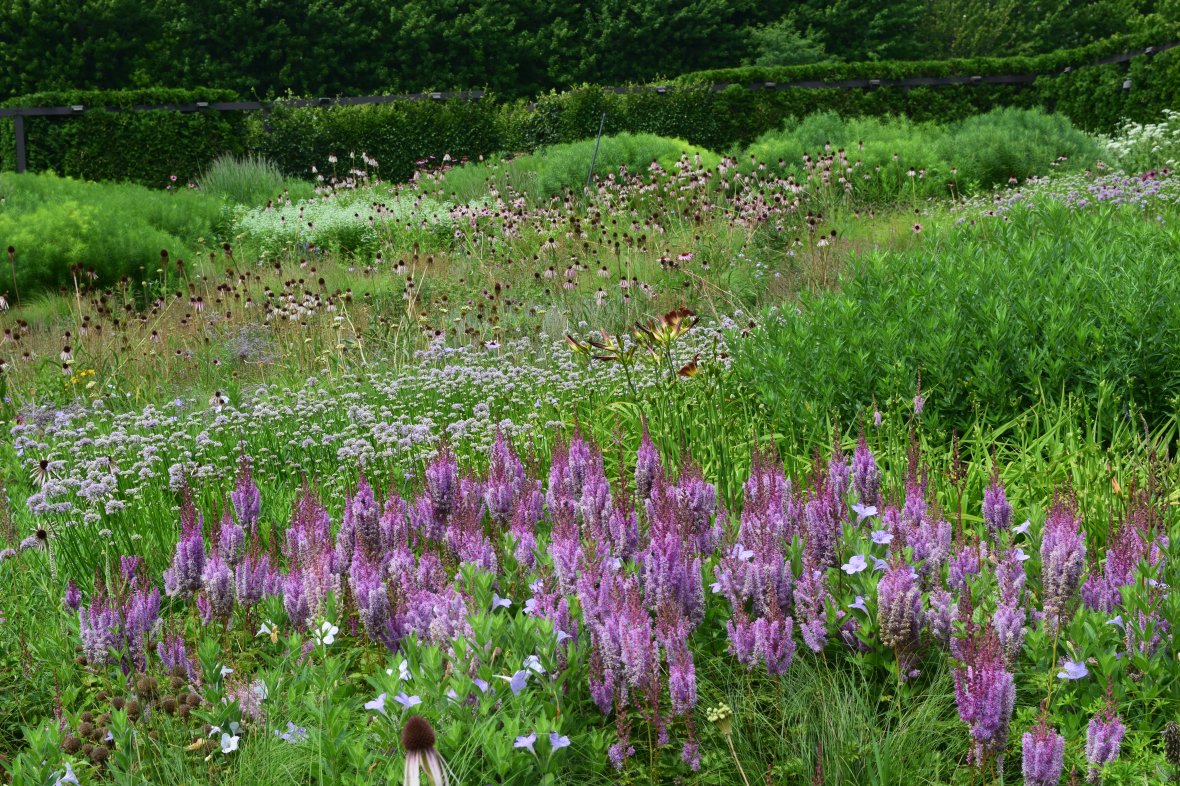 I’m surprised to see these ‘Purple Candle’ Chinese Astilbe (Astilbe chinensis) flowering in full sun, but I guess they like it.

I love how the Lurie Garden is always evolving, never static. It changes from season to season and from year to year. There are an infinite number of details to absorb, and with the never-ending adaptations and adjustments it is impossible to be bored in this garden.

49 Comments on “The Lurie Garden in July”