Posted on February 21, 2019 by gardeninacity

Flowers for the Kitchen

We fixed up our kitchen about a year ago, and ever since then I’ve wanted to write a post about it. The process was lengthy and painful but necessary – the cabinets were falling apart, and you can glue things back together only so many times.

The whole process took about three months. Someone should invent a cryogenic process that would allow homeowners to hibernate during kitchen renovations. In the absence of that option, we lived with no stove or sink and the refrigerator and microwave in the living room. Lots of takeout and frozen food.

The contractor was a nice guy who really did hold himself to a high standard. On the other hand, I found him a little bit too much of a night owl. He would show up at our house after lunch and work until 11 or 12 at night. He also had a personal catchphrase, which he would repeat frequently during every conversation. It went something like “ALL riiiiiiight!”

But the point is, he got the job done. And what made Judy and I especially happy were the stylized flower tiles that Judy had found at Wildflower Graphics. Setting these tiles was an exacting job, as many of the surrounding tiles had to be precisely cut. 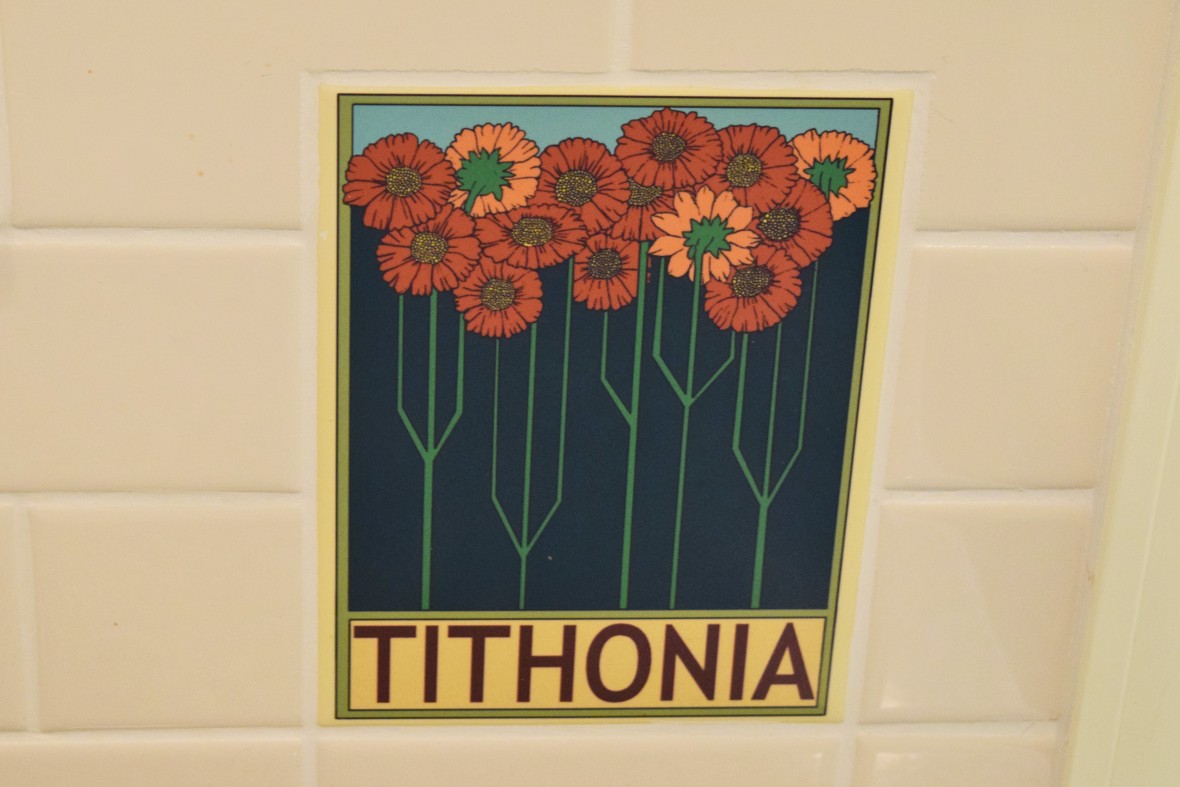 Of course we had to have a Tithonia tile.

There was some conflict concerning how many native versus exotic plants should be represented, but we found a reasonable compromise. 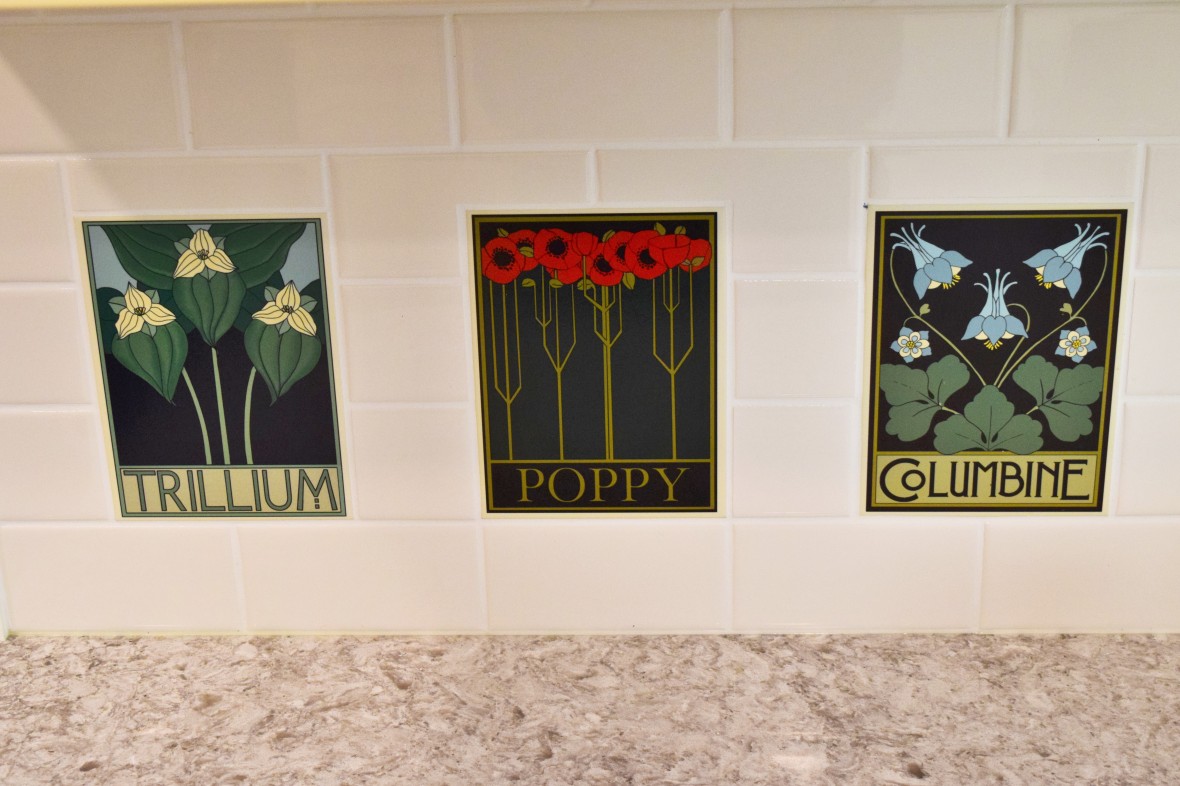 There were some other good things about the new kitchen, in addition to the flower tiles. We have a lot more shelf space. Judy reorganized where everything goes, though, and I still have trouble putting stuff away after washing the dishes. 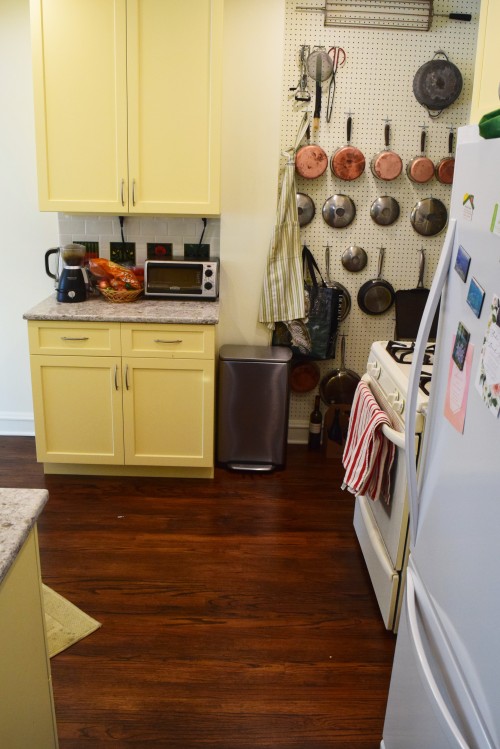 Here’s the view from the entrance to the kitchen.

There are vegetable tiles as well, though these are usually somewhat hidden by the toaster.

To get to the back porch you have to walk through the kitchen. I refer to the space between these 2 counters as the Straits of Gibraltar. Our kitchen is on the cozy side. 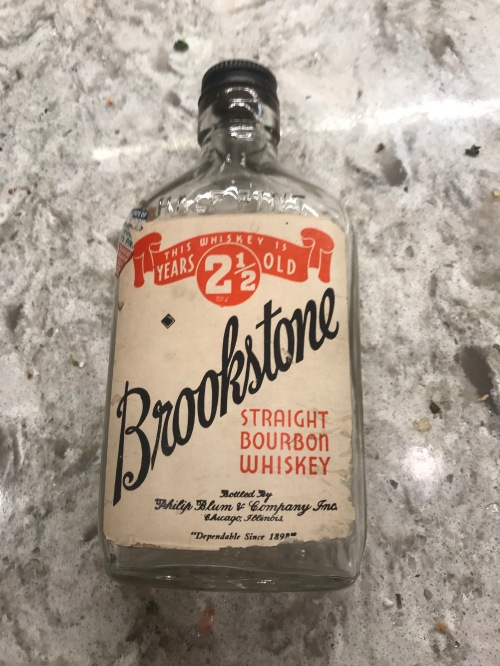 On a completely different note, when our contractor opened up the old walls, he found several pint bottles of whiskey left among the studs, presumably by the carpenters who built the house in the 1930s. This may explain why the walls in our place tend to be a bit slanted and curvy here and there.

Anyhow, flower tiles in the kitchen can be just the thing to help get a gardener through the winter.

77 Comments on “Flowers for the Kitchen”