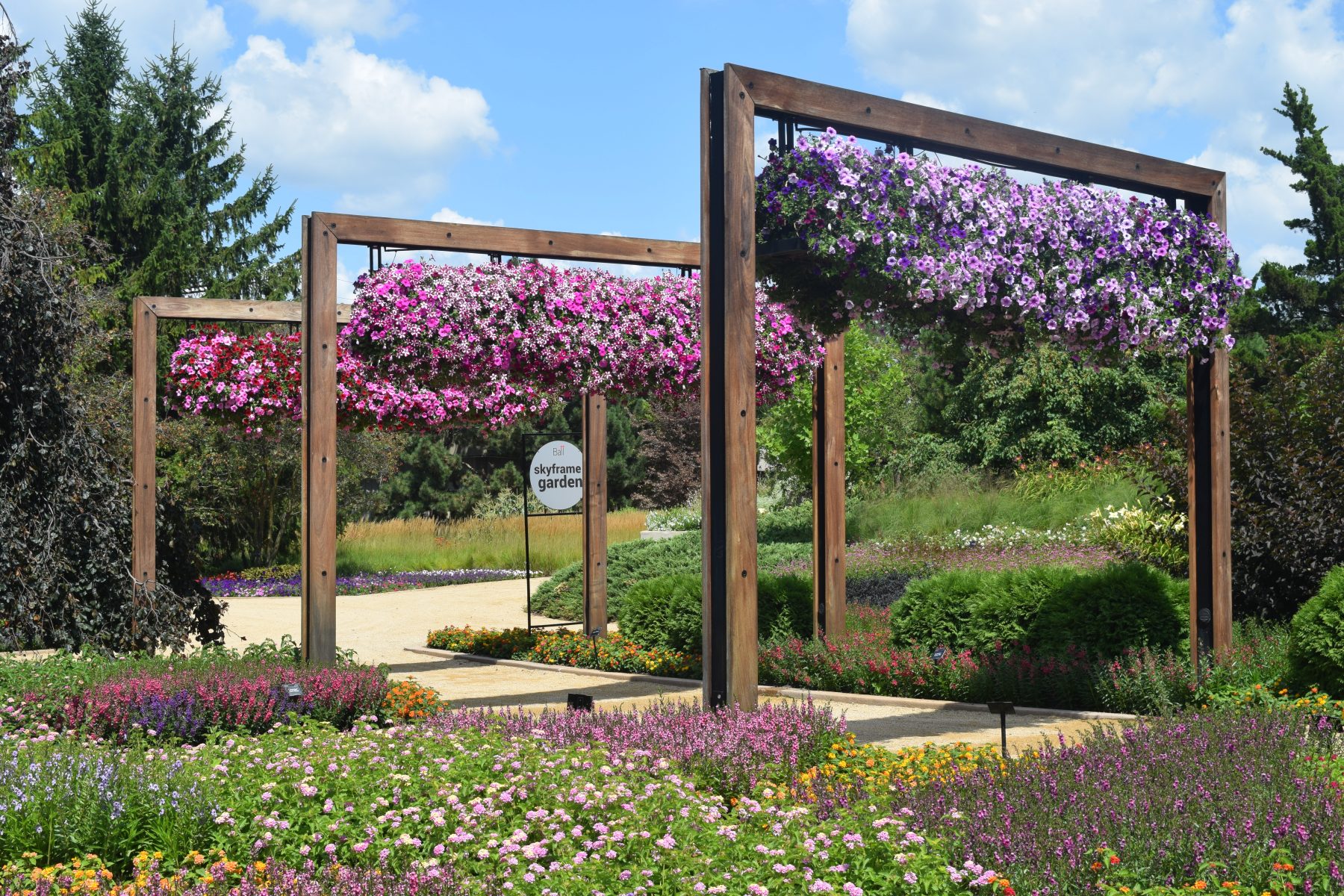 So let me tell you some more about our trip to Ball Horticultural.

We were lucky enough to be invited along with some other garden writers to look at plants that will be introduced at garden centers next spring. The company has a facility in West Chicago, about 40 miles from the Loop. To be honest, I didn’t even know it existed before this summer.

Ball Horticultural maintains 9 acres of testing and display gardens as part of the West Chicago facility. Unfortunately, they are not open to the general public. CORRECTION: A reader points out that the garden is generally open on Saturdays in August, but is closed for renovations for all of 2019. 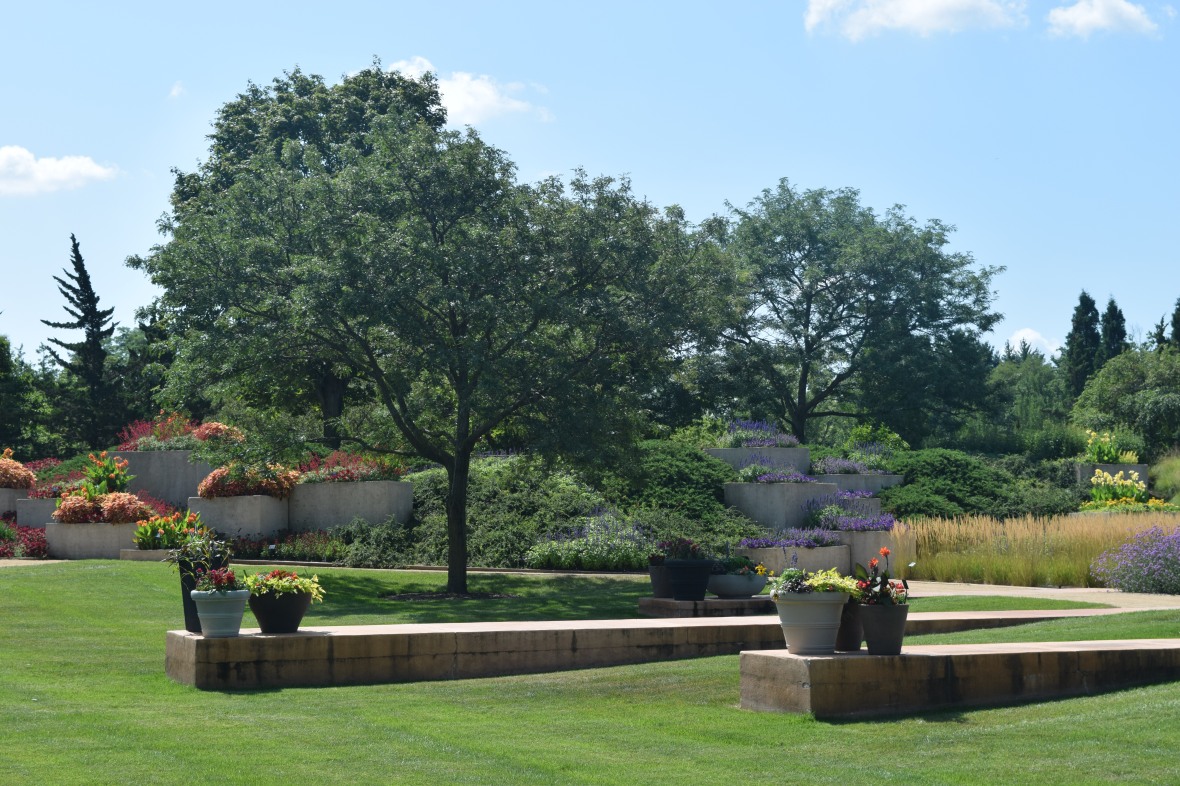 Displays have an emphasis on annuals, but there are also edibles and perennial plants. I’ll just mention a few of the new varieties that caught my eye. 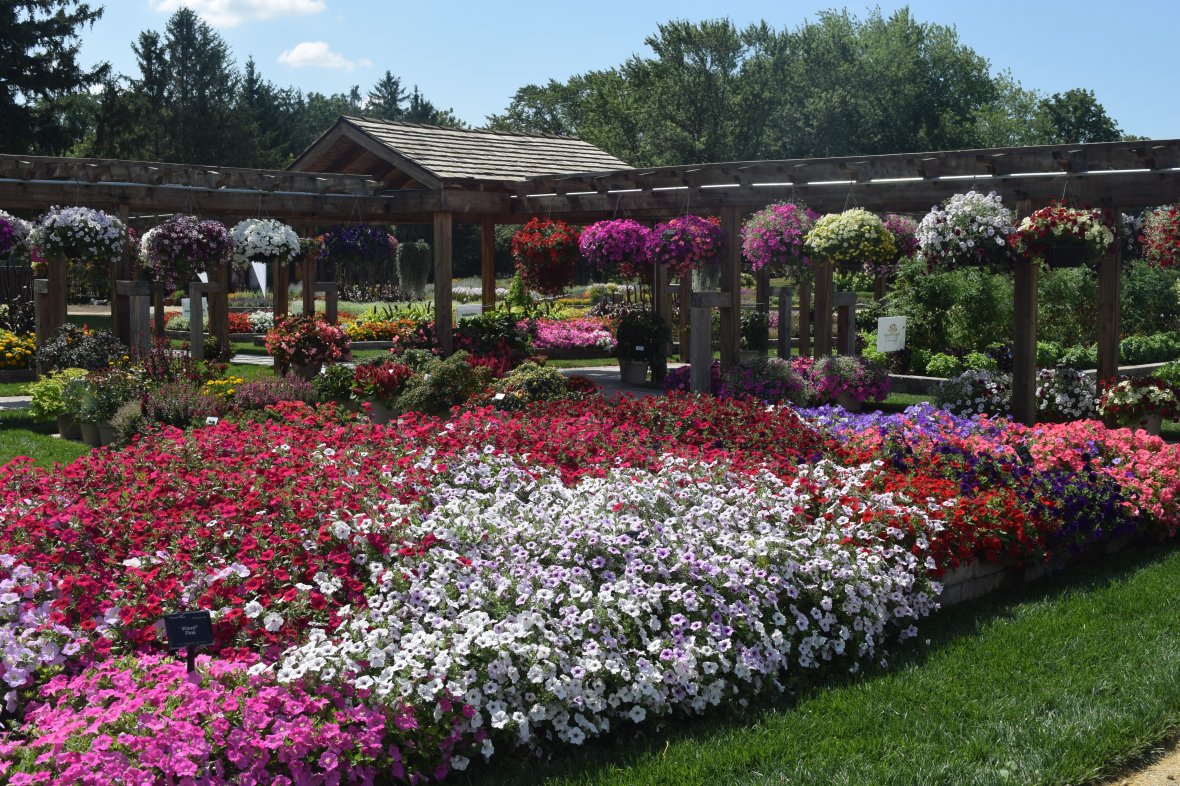 My own garden relies mainly on perennials with a few annuals used as accents or in pots. Even so, it’s hard not to swoon when I see masses of color as with the Petunia’s above. 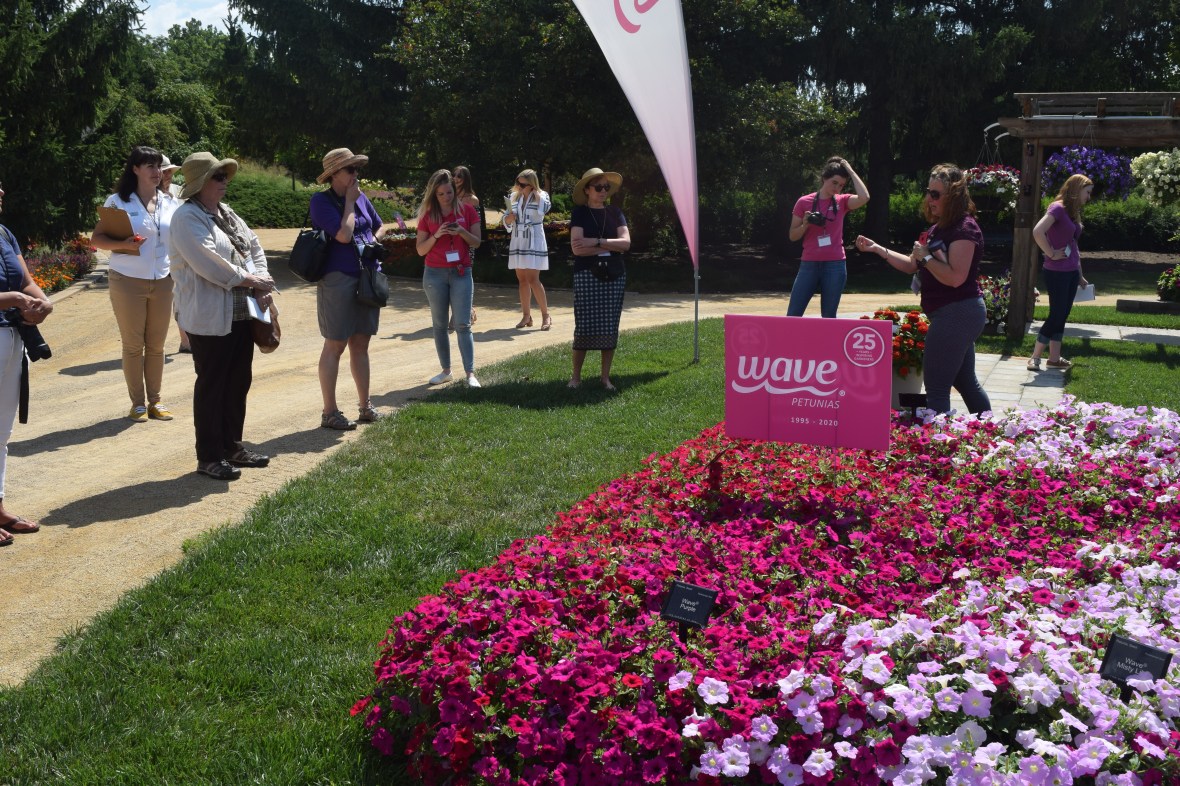 Wave Petunias are one of the better known series associated with Ball. They’ve been around since 1995, but next year there will be 2 new colors: ‘Carmine Velour’ and ‘Lavender Sky Blue’. The Wave Petunias are known for a more spreading habit and heavy flowering. We got to take home a few free pots of each. Score! 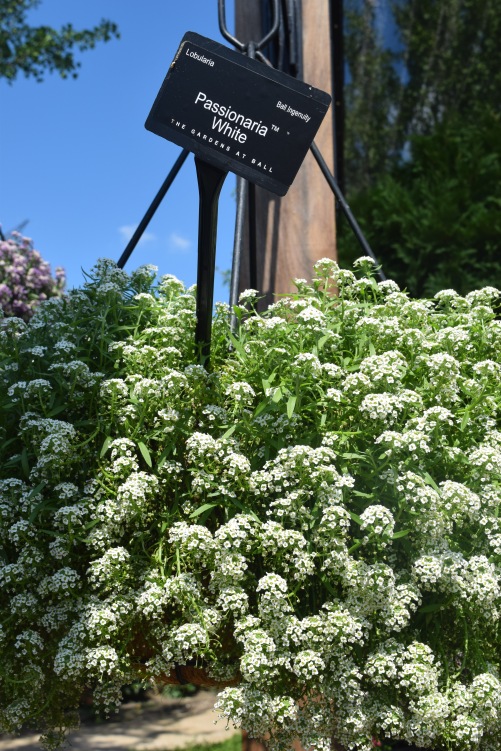 Other than the Impatiens mentioned in the last post, the new annual that excited me most was the Passionaria series of Sweet Alyssum (Lobularia maritima). I love Sweet Alyssum, especially that honey fragrance, but they tend to wither during hot summers. Passionaria varieties, though, will withstand strong sun and high temperatures.

Their resistance was demonstrated by the hanging pots all around us, looking cool and content despite facing into the August sun.

I’m not into Rex Begonias, but the new Jurassic series is certainly striking. This variety is called ‘Silver Swirl’.

There’s also a new series of Zinnias called Zesty, including a purple variety, which I guess is a new thing. I’m going to stick with my favorite orange and red, though.

I think what interested Judy the most was the ‘Emerald Tower’ basil. This is a sweet basil with an upright habit and almost never bolts.

In the tomato patch we got to try some new varieties of disease-resistant cherry tomato, right off the vine. ‘Artemis’ is so incredibly sweet that the marketing people apparently suggested ‘Sugar Coma’ as the variety name.

After finishing up in the garden and breaking for lunch, we got a tour of the seed lab. I was disappointed to learn that those tubes are used for coating seeds, and not transporting space travelers like in Star Trek. Ball produces seed for growers, and the coating keeps seed from getting stuck in their equipment.

By around 3 o’clock we were ready to head home, but not before filling the back seat with petunias and ‘Emerald Tower’ basil. The petunias replaced some of the exhausted Sweet Alyssum in the pots near the front door. You can see both ‘Carmine Velour’ and ‘Lavender Sky Blue’ in the containers above.

It’s good to know there will be some good new options when it’s time to buy next year’s annuals.