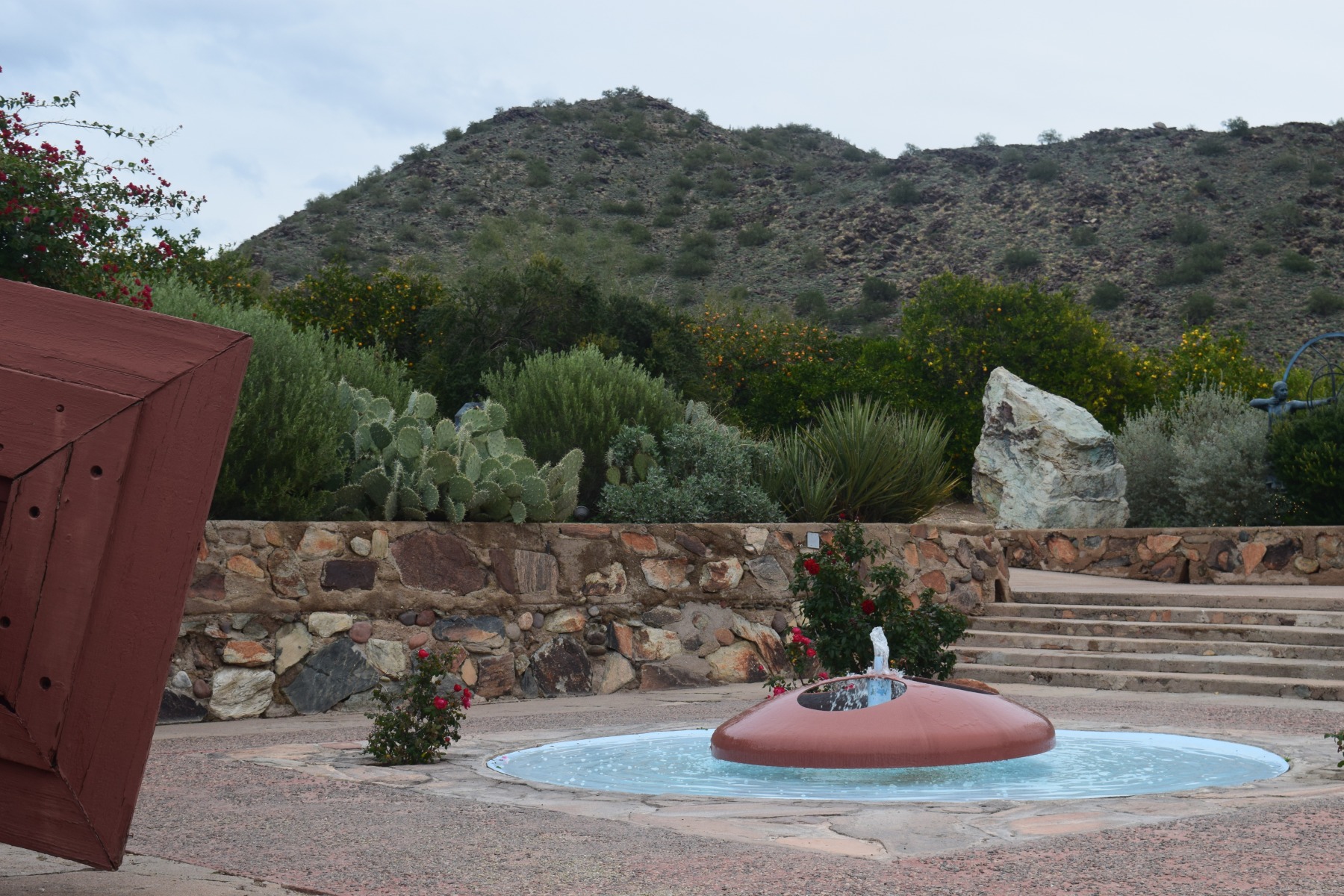 Posted on January 2, 2020 by gardeninacity

While in Phoenix we got to see Taliesin West, which was Frank Lloyd Wright’s winter home – as well as his architecture school and laboratory. Its 600 acres are located on the outskirts of Scottsdale, a Phoenix suburb. It’s open to the public, but you have to buy tickets in advance and go on a tour – you can’t just show up and wander around. 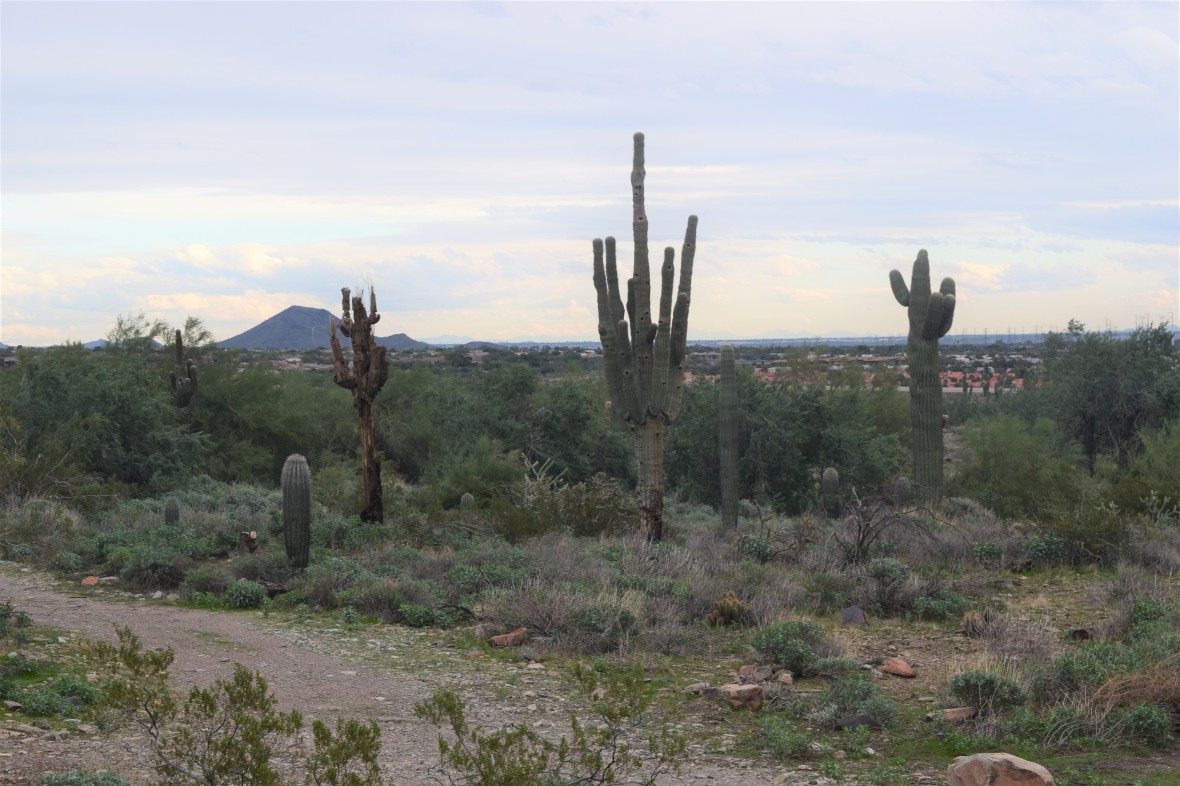 It was far more remote when Frank Lloyd Wright first came here with his students in 1937. They had to live in tents and dig a well for water. Every year they would come for about 6 months and construct buildings by hand from local materials. Stones were collected from the surrounding desert.

The original Taliesin, Wright’s summer home, is in Wisconsin. 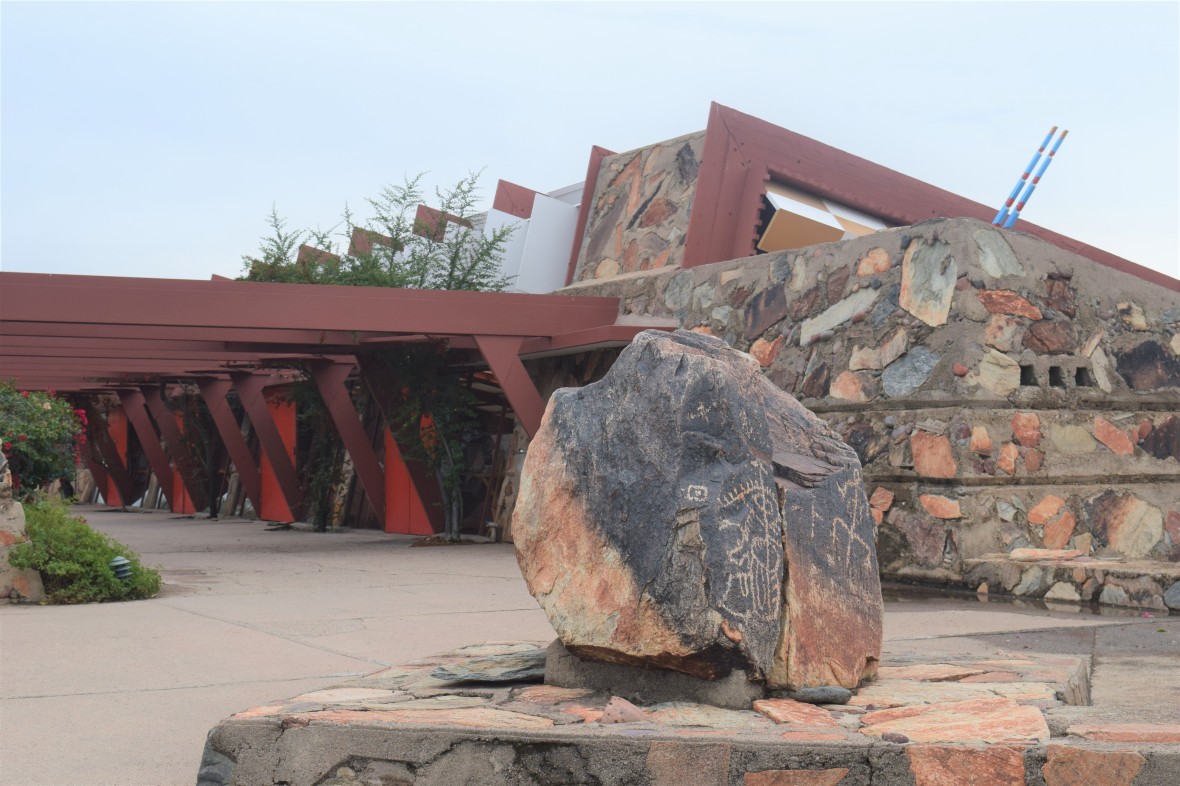 Some of the stones they found bore pictographs left by indigenous people. 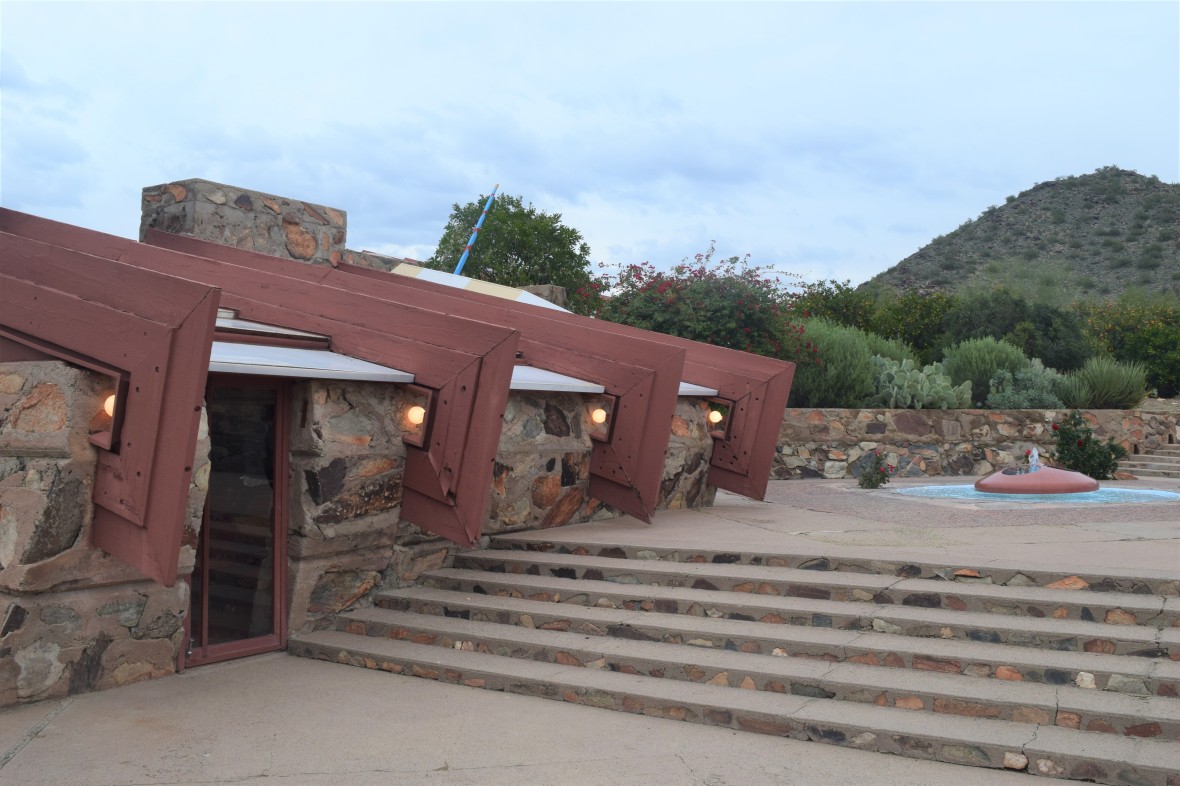 Our tour was led by a docent who was both knowledgeable and enthusiastic. She was mostly interested in the buildings, though, while I was concentrating on the grounds. 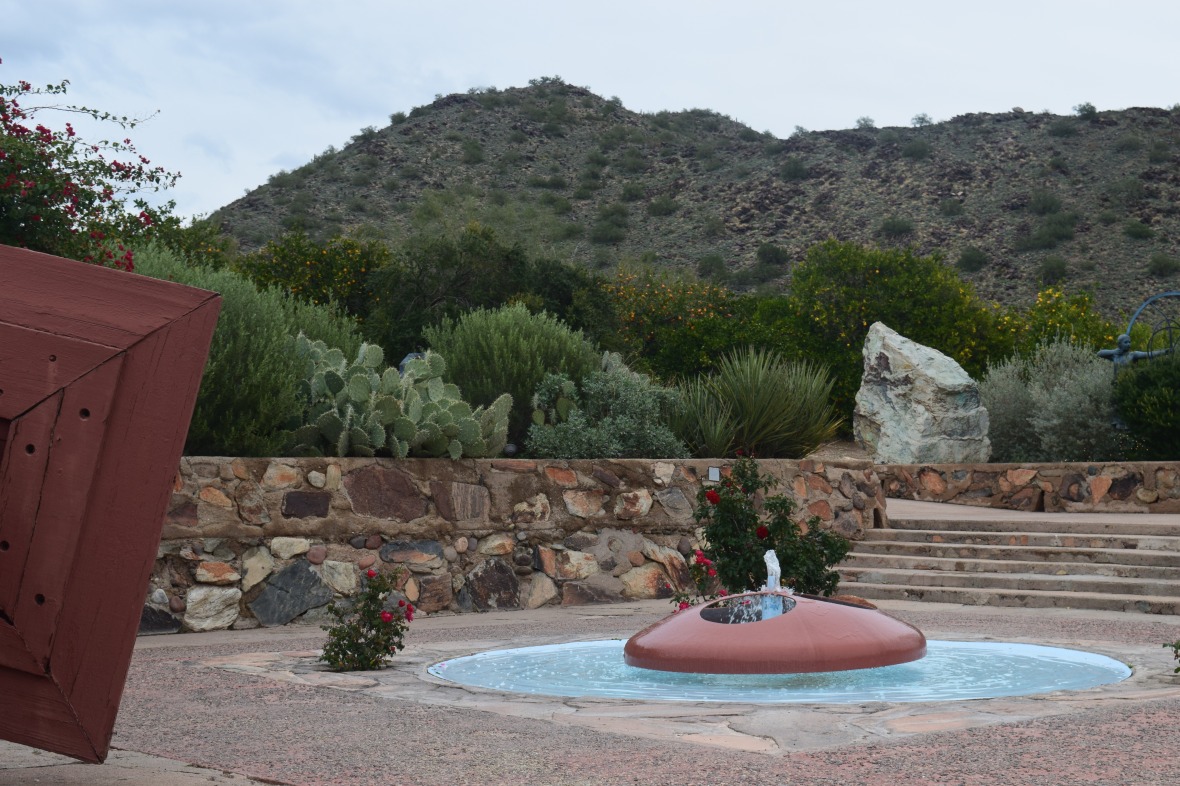 I thought this fountain courtyard was quite beautiful. I like that enormous decorative stone. Those are groves of orange trees in the background. 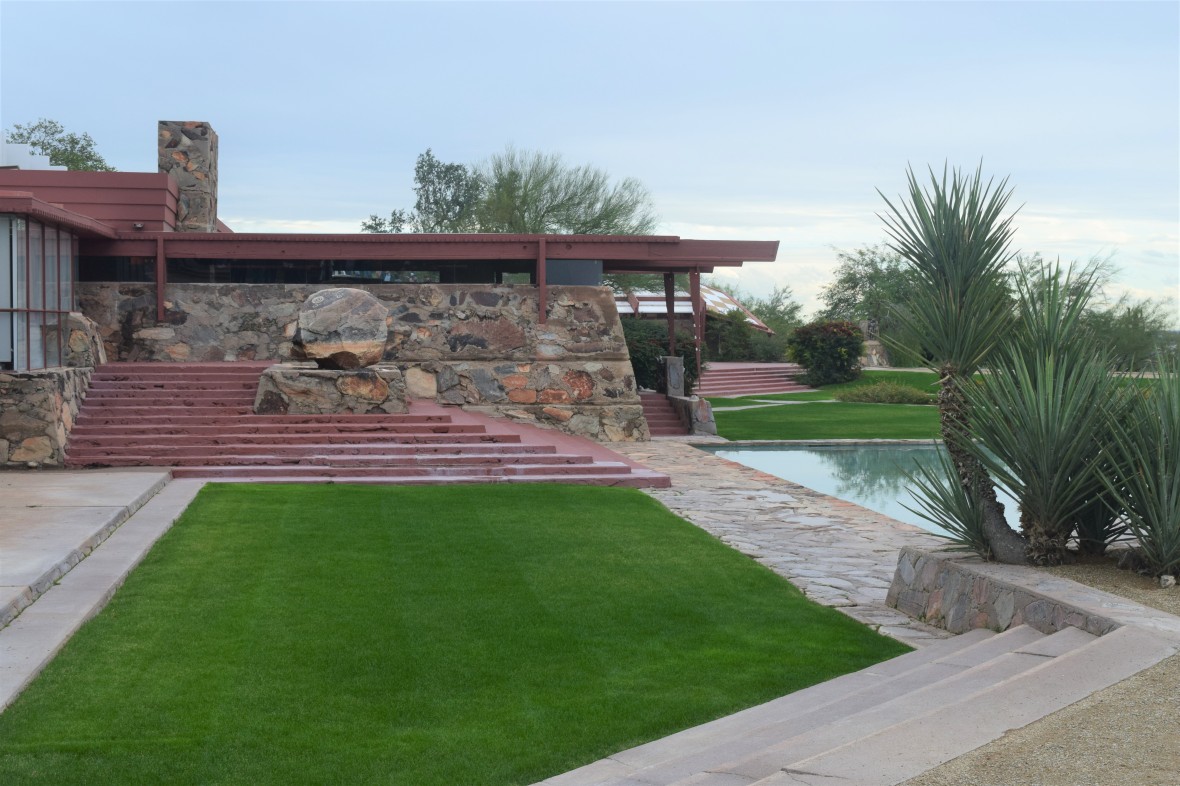 Both the buildings and grounds feature geometric shapes inspired by the surrounding desert, hills, and buttes. Buildings are low, the walls and stairs angled like the nearby hills. 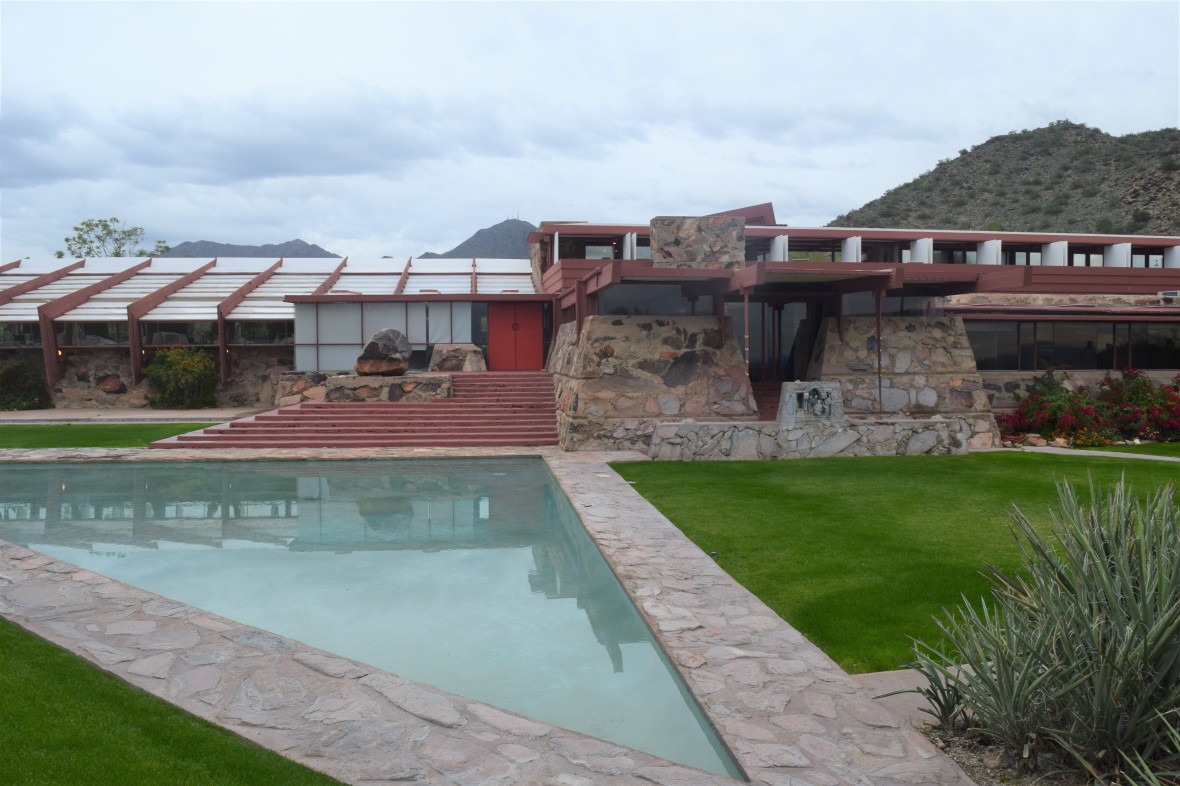 This pool was built for practical as well as aesthetic reasons, to serve as a water reservoir available for putting out fires. In the early years this place was far too remote to be served effectively by the nearest fire department.

The woodwork and stairs above are painted a particular shade of red that imitates the red sandstone of nearby buttes. 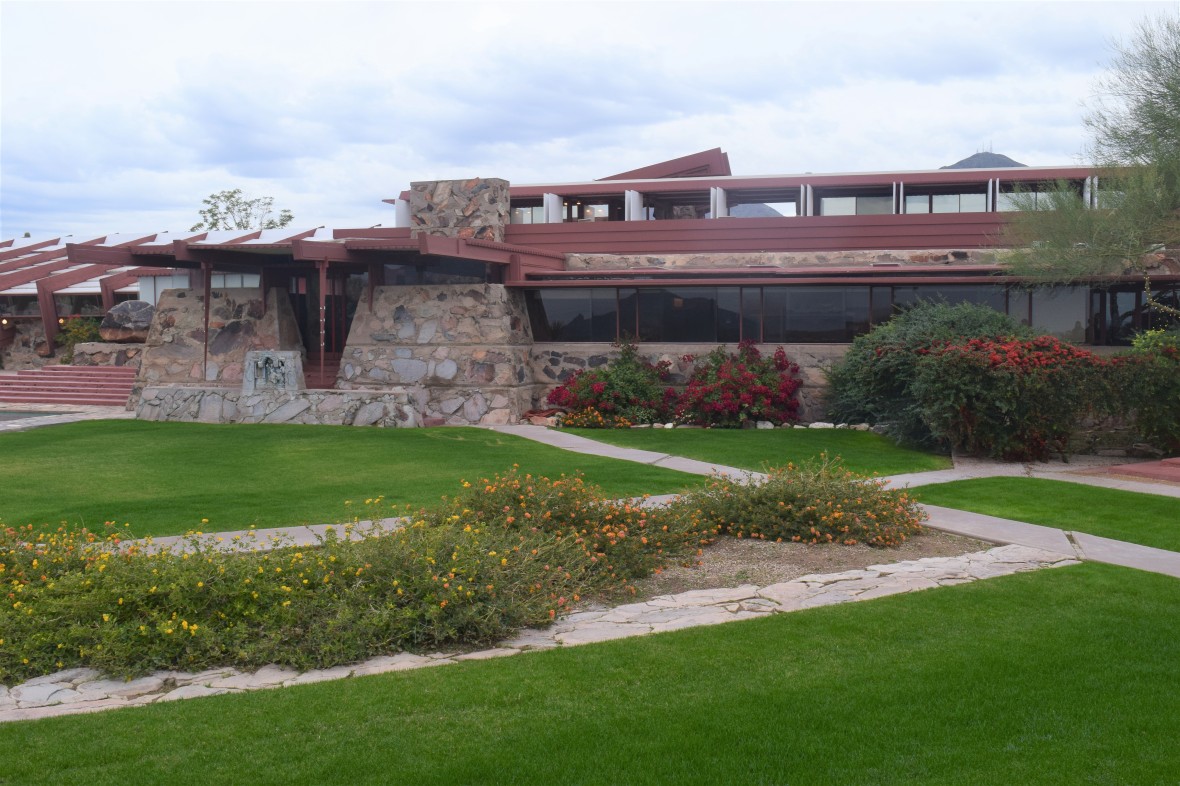 I believe the docent said that the roof was made from canvas. Windows are designed to let in horizontal light but stop the harsh direct desert sunlight.

I did wonder why there was so much lawn. Did they try to keep it green during the summer, or let it go dormant? I should have asked, but didn’t think of it. Incidentally, those are Lantanas (yellow and orange) and Bougainvillea (red) blooming above. 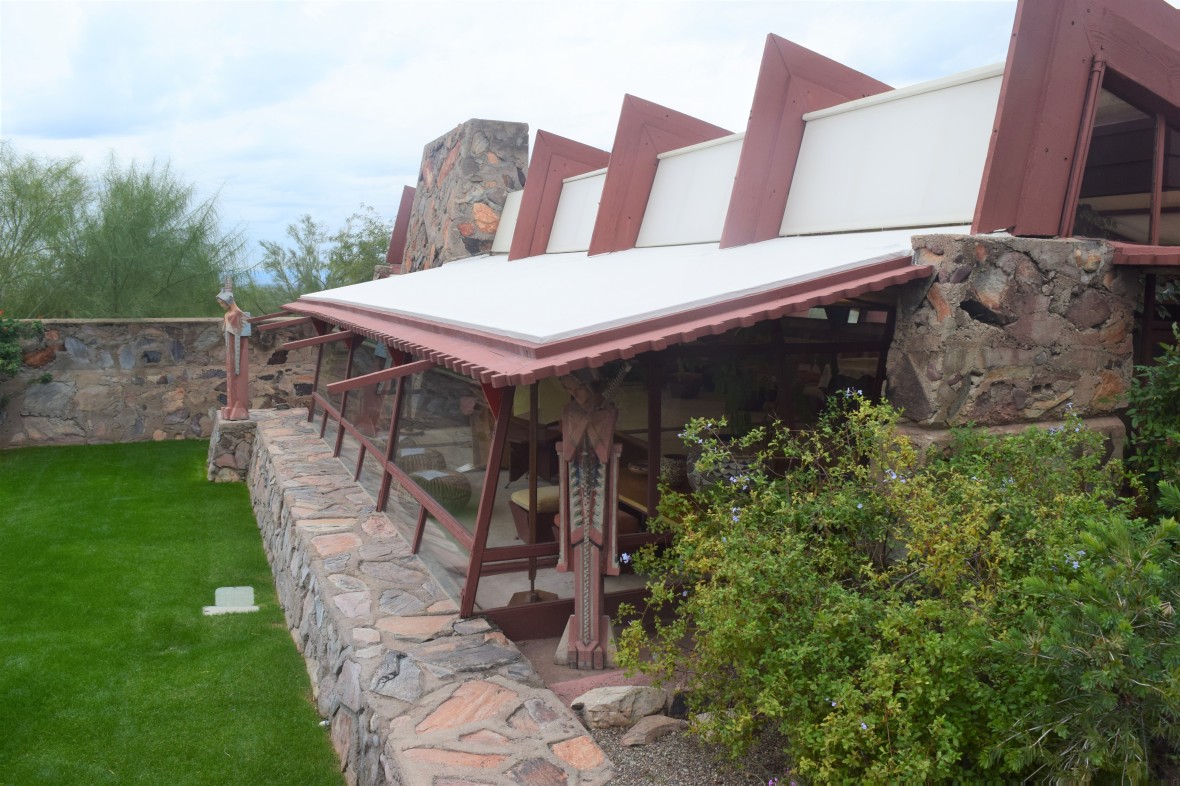 There is something significant about these 2 statues but I can’t remember what it is. Short-term memory is not what it used to be. 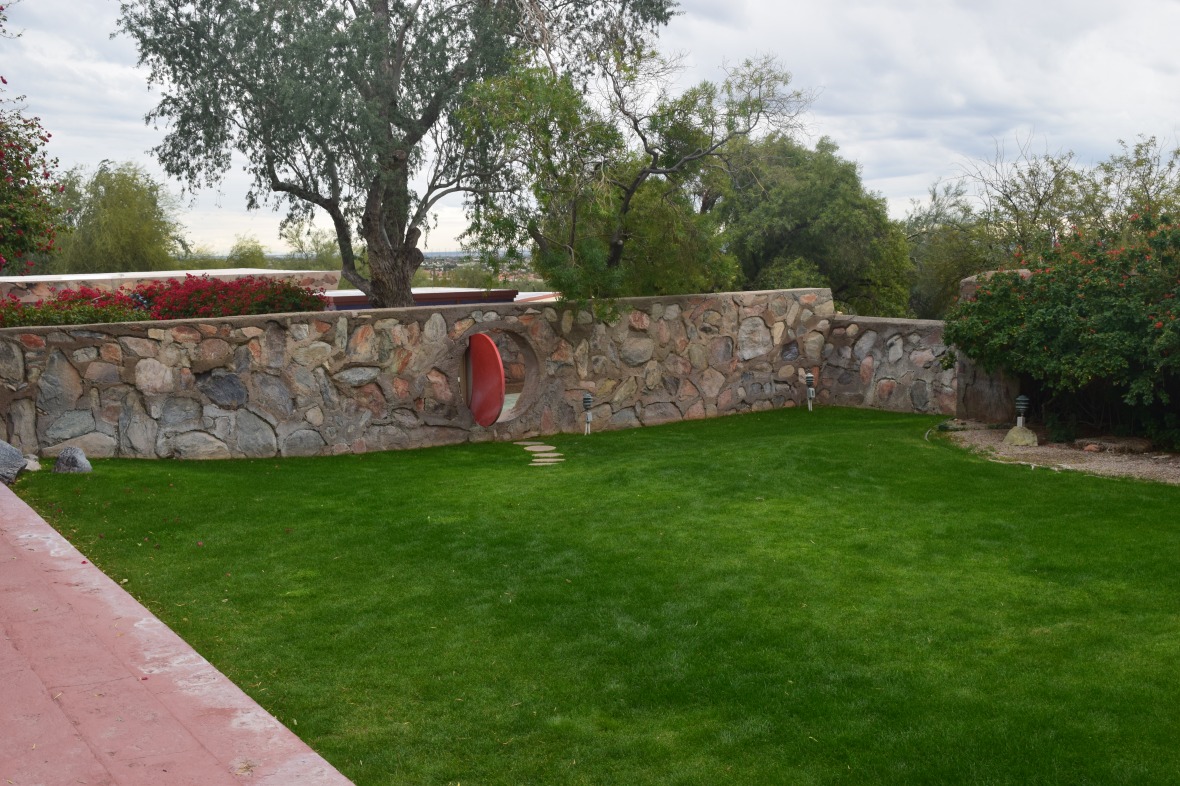 This courtyard features a moon gate. 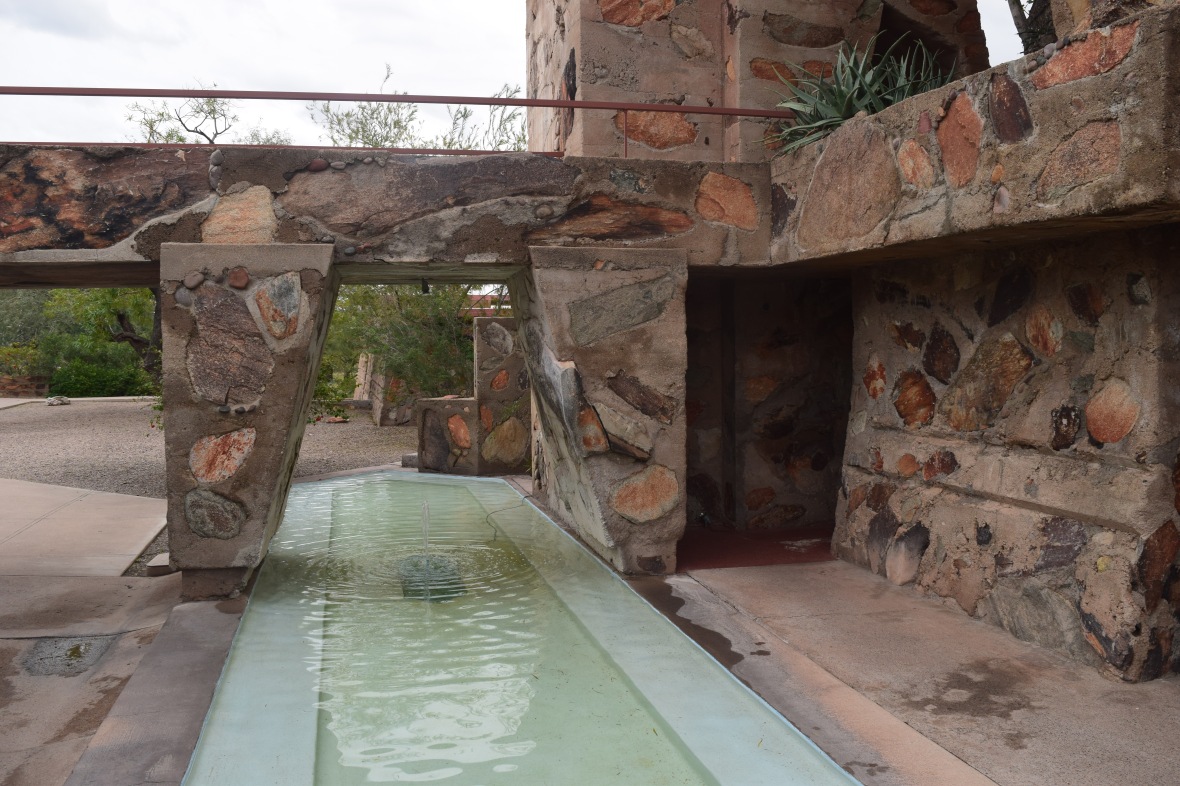 Nice water feature along one side of this building. Above is a bridge that unites 2 structures. 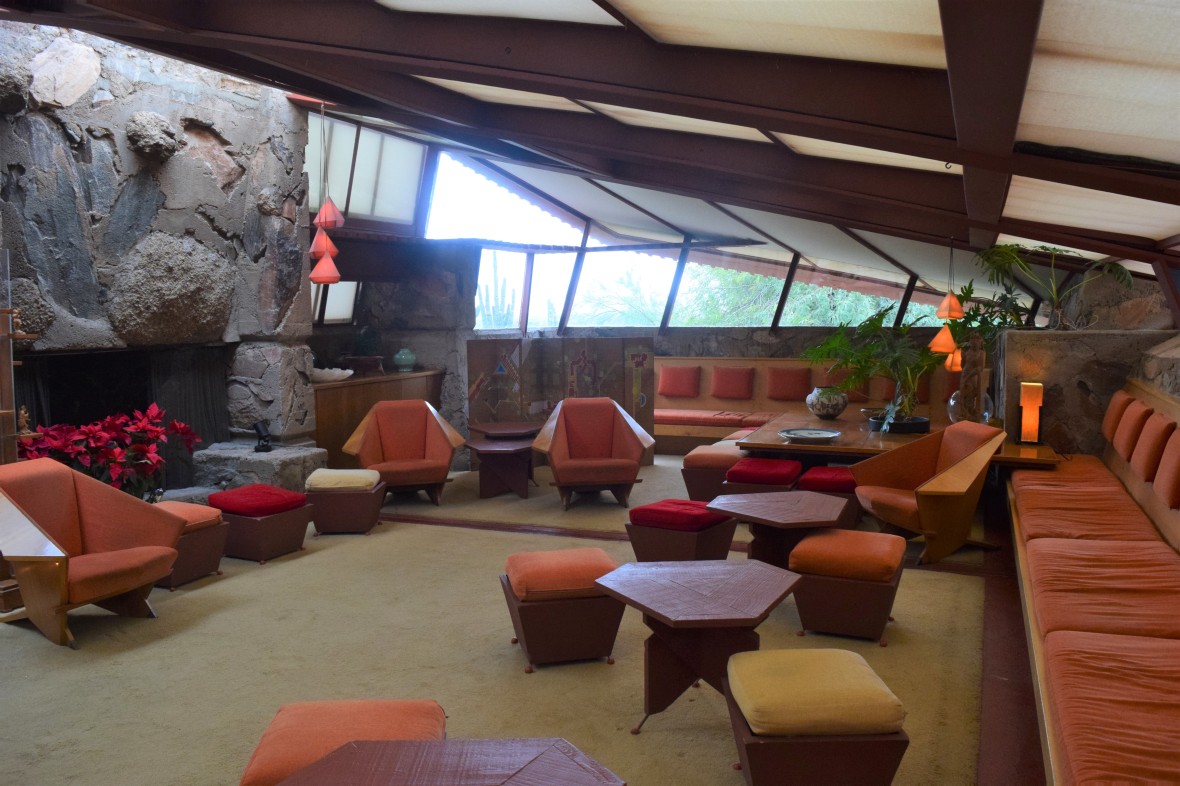 Judy says I shouldn’t neglect the inside bits. This is the room they built for entertaining. Apparently Taliesin West was visited by many celebrities from the worlds of entertainment, politics, business, etc. Many of them were personal friends of Frank Lloyd Wright. The furniture was designed by the students, that chair that looks like it has wings was inspired by origami. 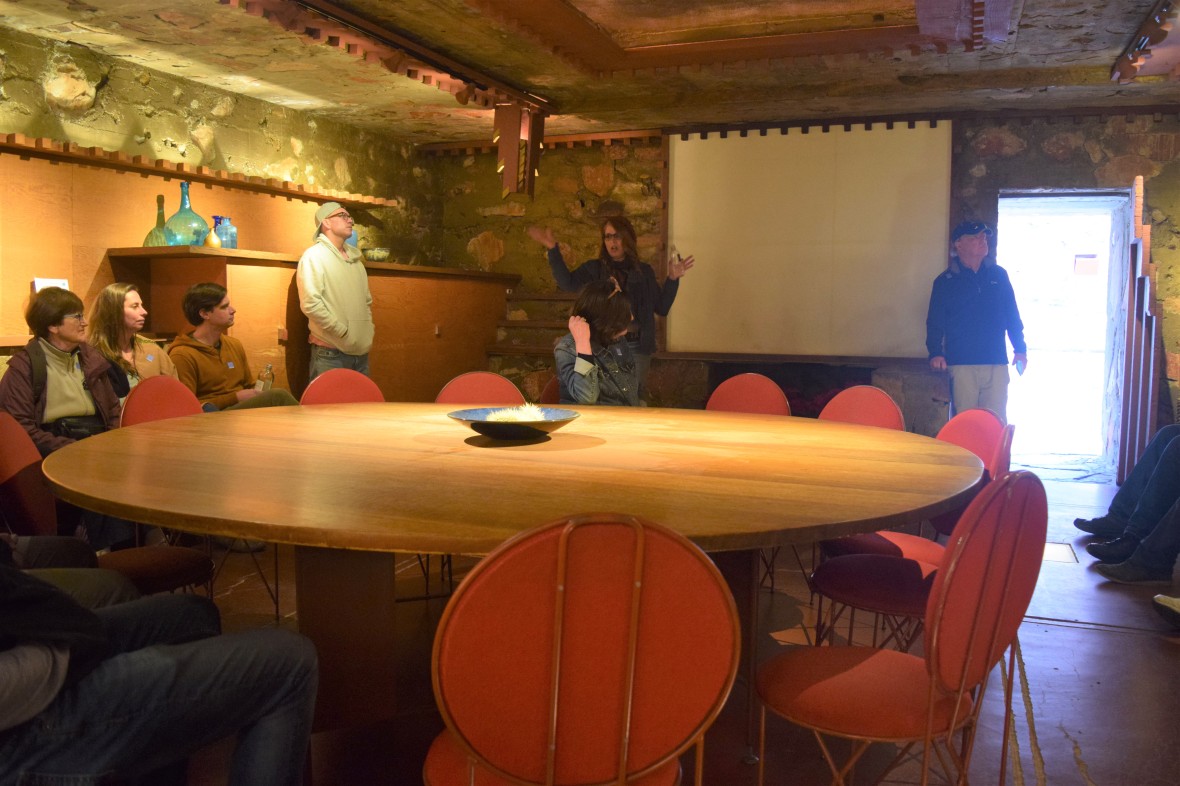 This building was initially used to watch movies, I think. Frank Lloyd Wright was a big fan of westerns. 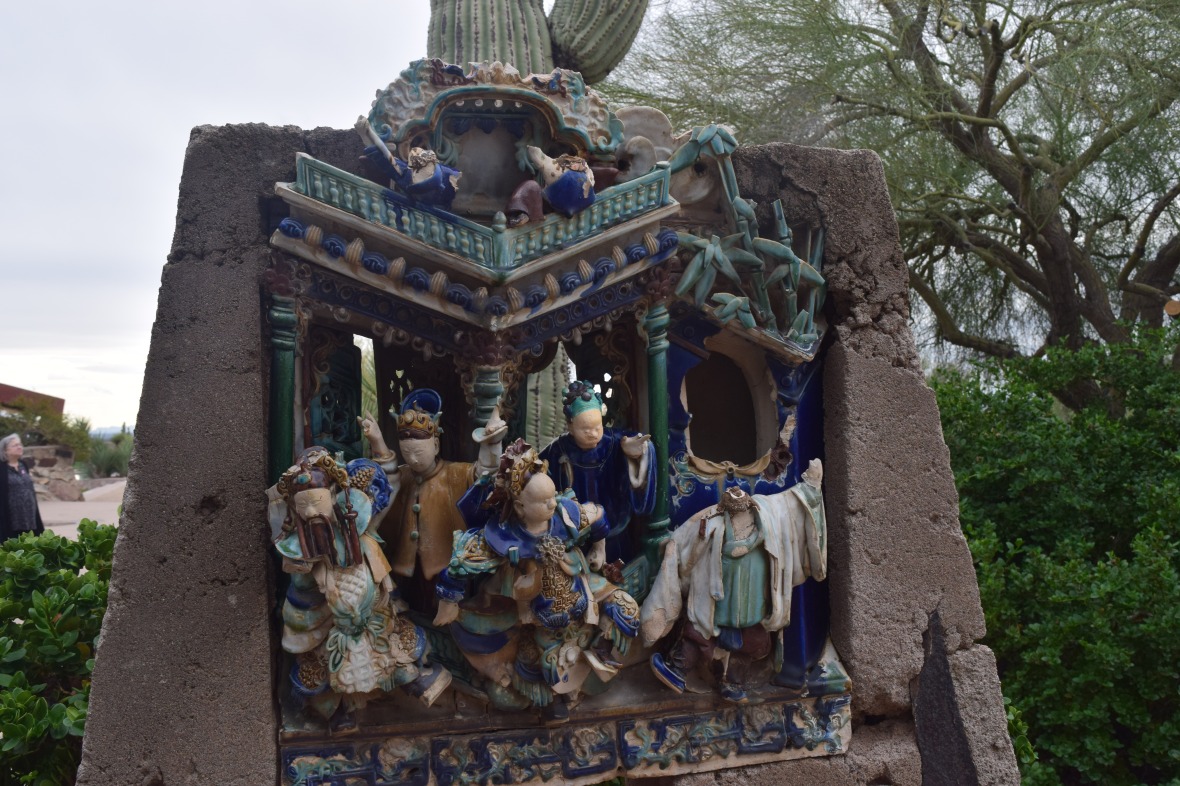 He was also fascinated by East Asian art. He accumulated a vast collection, some of which adorns the campus. 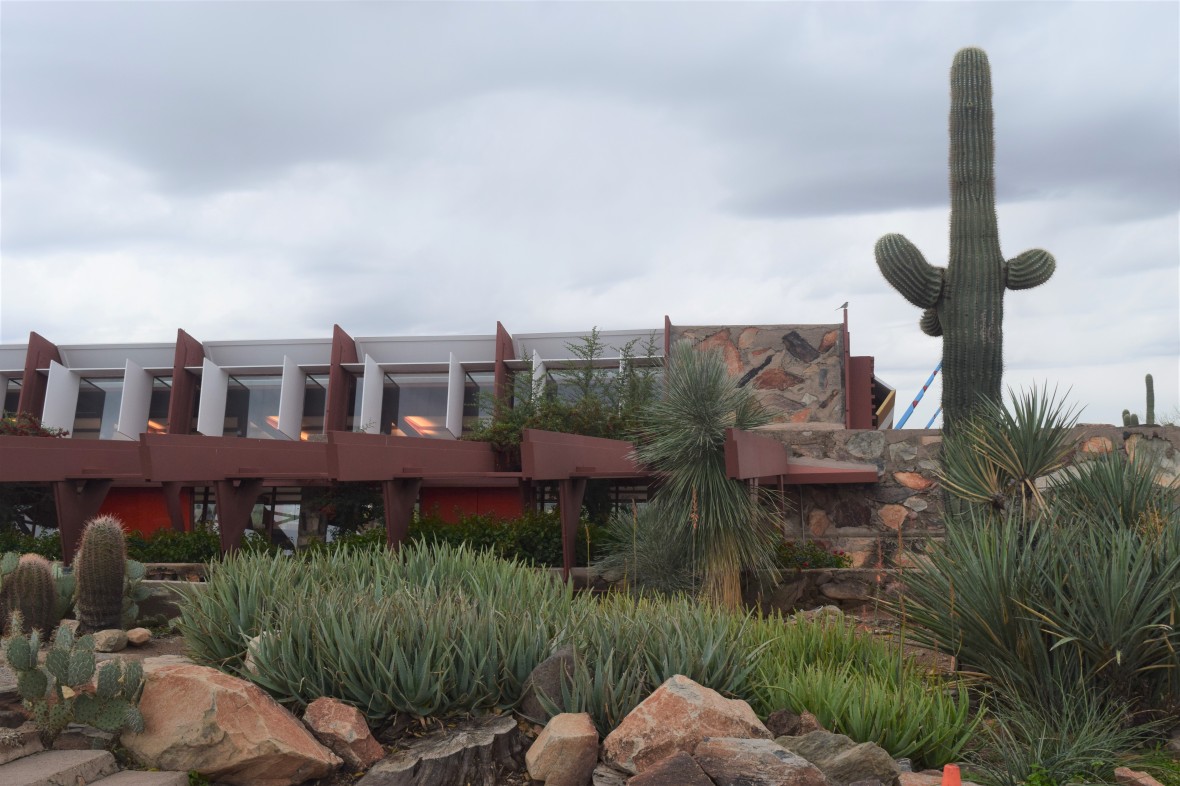 Taliesin West still serves as a school of architecture, as well as headquarters for the Frank Lloyd Wright Foundation.

Even if you are not an architect or architecture enthusiast, it is definitely worth a visit. It demonstrates Wright’s inspiration for design powerfully and movingly.

← The Desert Botanical Garden
An Easy Desert Walk in Phoenix →